First time I heard Rhino’s remastering of a Television song was on its 1993 D.I.Y. compilation, Blank Generation. That collection focused on the New York group of musicians making waves in the late seventies, and Television was repped twice: with the opener track to Marquee Moon (1977), “See No Evil” and “Venus.” The sound was so crystalline and suited to the band’s piercingly elliptical guitarwork that I’ve been waiting ever since for the label to do versions of the two Elektra elpees released by this outfit. 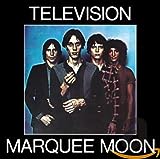 Eight years later, and Rhino has obliged. Moon (and its slightly lesser follow-up, Adventure) has been released as a deluxe reissue with all of its tracks remastered by sonic superman Bill Inglot (typoed as “Ignlot” in the booklet credits – jeez, he’s been working with Rhino for years now!), alogn (heh) with bonus tracks that include the band’s two-part debut single “Little Johnny Jewel.” Unquestionably cool.
Of the big four to emerge from the CBGB’s axis (Ramones, Blondie, Talking Heads, these guys), Television was readily the most cultish. Lead singer/songwriter Tom Verlaine had a voice that was, to be put it charitably, even less accessible than early David Byrne: at times he sounded like a Toon Town character with his non-existent nuts in a vise. But once you grow accustomed to it, Marquee Moon becomes hypnotic. What he lacked as a singer, Verlaine made up many times over as a guitarist. Listen to him sail over the album’s uncut title song – equally sinuous second guitarist Richard Lloyd accompanying TV as the cut’s extended musical bridge grows taller and taller only to beautifully dissipate into a sprinkly array of notes – and any cavils about Verlaine’s voice become irrelevant.
Back in the day, some punk purists complained about the Verlaine/Lloyd guitar duels, sneeringly comparing Television to the Grateful Dead. Me, I always thought that the band sounded like the Dead should have sounded based on those early skull-&-eyeball Rick Griffith album covers: lyrically poetic and vaguely ominous, soaring and hallucinogenic, musically adventurous. The words are more evocative than concrete (“Prove It,” for instance, utilizes detective fiction metaphors, though the scene it describes is abstract), which suits the band’s slippery musicianship.
A great album – and for once the bonus “alternate version” tracks are worth playing more than once, too: Verlaine and Lloyd (currently best known for his session work with Matthew Sweet, but he did a pretty sweet solo album not too long after Television broke up, too) provide the most penetrating guitar interplay since that Allman kid duked it out with a fucked-up Clapton. In an era where plenty of bands snubbed “musicianship” in an understandable reaction against empty virtuosity, Television persuasively demonstrated that skill and rock ‘n’ roll passion are not incompatible. To paraphrase Verlaine, Marquee Moon states the facts.
(Originally posted as part of a seasonal Rhino Records appreciation.)

‘Trek to Yomi’ Review: A Samurai Epic That Transcends Its Medium