This DVD takes viewers on a tour through the career of the innovative Talking Heads.

Head bowed, obviously ill at ease, David Byrne in a 1978 interview makes it clear that he doesn’t care to have his band’s music categorized as punk. But for sure he allows, they are certainly not country. Tina Weymouth, certainly more outgoing, explains in a ’79 British documentary that the band doesn’t think of itself as new wave, while Chris Frantz and Jerry Harrison talk about the band’s concerted effort to avoid the rock star stereotype.

These are the Talking Heads as they picture themselves at the start of what was to be a fairly short career by some standards, but a career leading to the Rock and Roll Hall of Fame. These are some of the insights from the bonus material on the newly released DVD, Talking Heads: Chronology, which traces the history of the band mostly through films of performances from 1975 through 2002. 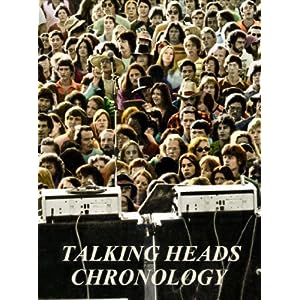 The DVD does include some backstage footage, a few minutes of comments by fans, and one introduction by a talking head, but the real focus is on performance. After a 30-second clip of a 1976 soundcheck at The Kitchen, there are three tracks—”With Our Love,” “I’m Not in Love,”and “Psycho Killer”–of the original trio playing at CBGB in 1975. The footage is in black-and-white and Byrne really appears ill at ease on stage. Some Byrne intros from the ’76 Kitchen show follow, and they show him still quite uncomfortable in the spotlight.

By the time they get to performances in 1978 in England, New York and Berkeley, California, Byrne has developed a more confident persona. In his interview, he talks about his nerves before going on, but his adrenalin kicks in when he takes the stage. The performances of “Don’t Worry About the Government,” “Thank You for Sending Me an Angel,” and “Warning Sign” show him gaining confidence. By this time, the trio has become a quartet with the addition of Harrison on guitar and keyboards.

1979 performances of “Artists Only ” from Saturday Night Live and “Take Me to the River” from American Bandstand show the frontman at his confident best. Although when Dick Clark tries to interview him and the other members of the band after their song, the only one who seems at ease is bassist, Weymouth. The phrase she’s got for Byrne is “organically shy,” but it seems just as applicable to Harrison and Frantz.

The performances for the rest of the DVD include a larger ensemble which varies on different tracks. Additional musicians include guitarists Adrian Belew and Alex Weir, Bernie Worrell and Busta Jones on keyboards, and Steven Scales on drums. Dolette McDonald, Belew, and later, Lynn Mabry and Edna Holt do background vocals.

Songs from 1980 include “Crosseyed and Painless” from a show in New Jersey, and “Animals” from a performance in Germany which has Byrne doing a little nerdy dancing. “Love → Building on Fire” is taken from an ’82 California festival, and “Cities” is from the Montreux Festival in Switzerland. The band also does “Burn Down the House” on Late Night with David Letterman in ’83. This was the year they stopped touring.

The DVD ends with the Talking Heads’ performance at their induction ceremony for the Rock and Roll Hall of Fame. They all look a little older, and gray hair looks good on Byrne. Harrison looks older, but either his hair has not aged or he’s had it dyed. It’s hard to tell about Frantz, although he looks older as well. Tina Weymouth looks like she hasn’t aged a day. More importantly, they sound as good as they ever did—same as it ever was.

Talking Heads: Chronology gives you an interesting look at the different stages of one of the most innovative bands of their period. It gives you a real insight into how they developed as performers, while replaying some of their finest work. It may not be Stop Making Sense, but for real fans, to see them perform those songs once again is more than worth the price.