The long-awaited return of a fantastic Pacific Northwest singer/songwriter.

Years ago, I had a show called the Estrogen Nation that was broadcast from a college radio station. I played music from all over, with the only criteria being that it had to feature women as the lead musicians. In 2000, I attended the Folk Alliance conference in Cleveland, hoping to discover new artists to play on the radio, and that was where I first heard Alice Di Micele. I wandered into her showcase room by accident early on, and the music made me come back as often as I could throughout the rest of the weekend. I have been a fan ever since.

Di Micele has a voice that can command any room with the power and presence of it. She mainly sings in the lower registers, but her voice can soar high as well without losing any of its strength. She writes acoustic music with a jazz/rock/funk/blues soul to it that is seductively addictive. For the past five years, fans have had to make do with her seven-album catalog while she took a break from writing, recording, and performing. Thankfully, the wait is over. by ebb & by flow was released recently, and it is evident that the intervening years have not diminished her musical prowess one bit. 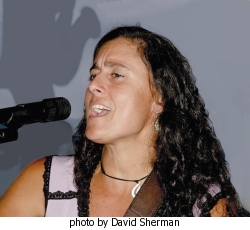 One of my favorite tracks is the first one, entitled "Mexico." The music and lyrics are uplifting with a hint of calypso. In contrast, the track the follows ("Conjuring") is a slow waltz, and the lyrics are introspective. It contains this gem of a line, "time with a lover is time well worth spending when two hearts are feeling the same." These two songs are different in style and intent, and like the rest of the album, they hold the listener's attention with their unique strengths. It could be the hook, it could be the groove, or it could be the lyrics. Regardless, every tune on this album has something that says, "Listen. Absorb. Enjoy."

As one might expect from an album entitled by ebb & by flow, most of the songs reference water in some way or another. "Made Out of Water" is a toe-tapping gospel for naturalists that features some spine-tingling harmonies. Be sure to listen to the end of that one on headphones sometime. The titular line appears in "Made Out of Water," as well as the groovalicious tune "The Way Your Heart Pounds."

Even the old hymn "Wayfaring Stranger" includes a water reference in the chorus (the Jordan River). Unfortunately, it's also my least favorite song on the album. I first learned "Wayfaring Stranger" from singing The Sacred Harp version, and I prefer the more traditional arrangement. Di Micele sounds amazing in her jazzy/bluesy arrangement of the song, and it will probably appeal more to those who aren't as fond of old hymn singing as I am.

Normally, album fatigue sets in towards the final few tracks, but not on by ebb & by flow. The final song is "The Cottonwoods," and while it is mellower and sparser than the other songs, it maintains the energy and intensity that the album began with. In a way, it acts as a hook that causes the listener to unconsciously hit the play button again in a feeble attempt to make the album continue on. It's only a mild disappointment to realize that the music has ended, because it takes just a few easy clicks to start it back up again from the beginning.

Alice Di Micele is back on the scene, and music fans should sit up and listen if they know what's good for them.