I hadn’t heard of the Baftas before, but I’m striving for internationalism. Lord of the Rings: The Return of the King was the big winner:

The film won five awards including best film, but the best director prize went to Master and Commander’s Peter Weir. 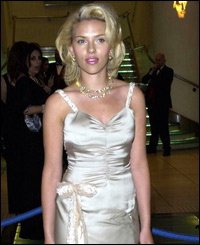 Bill Nighy was the only Briton to win an acting award, taking best supporting actor for comedy Love Actually.

Master and Commander won four Baftas, but The Return of the King also won the audience award for best film giving it the edge on the night. [BBC]

Rings director Peter Jackson gave a nod to the locals:

He said: “Although we were a bunch of Kiwis working with American money we were always aware we were looking after one of Britain’s most-beloved books.”

….It was a night of glamour for the Baftas with Johnny Depp, Laura Linney, Holly Hunter, Sir Ian McKellen and Emma Thompson among the stars attending.

The winners are: Best film
Lord of the Rings: The Return of the King

Best film not in the English language
In This World

Adapted screenplay
The Return of the King

Short animation
Jojo in the Stars

Make Up & Hair
Pirates of the Caribbean

Visual Effects
The Return of the King

Cinematography
The Return of the King