Completing a vertiginous year that has seen him ascend to stratospheric personal heights of giddy love and fatherhood, and plummet to depths of public ignominy and professional rejection, Tom Cruise and his film-producing partner Paul Wagner were named the new heads of the United Artists film studio today.

The sweet deal gives the pair — whose film productions include the Mission:Impossible movies, War of the Worlds, and The Last Samurai — complete control of the studio's production slate, expected to be about four films a year, and allows Cruise to appear in films from other studios. Wagner will rule the roost as chief executive of the storied company, owned since 1981 by MGM but founded in 1919 as a haven for artistes by D.W. Griffith and actors Charlie Chaplin, Mary Pickford, and Douglas Fairbanks. 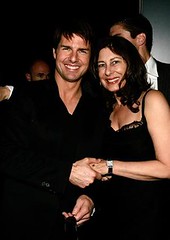 Cruise hit biz-bottom in August when his and Wagner's 14-year producing deal with Paramount was not renewed by the studio. Sumner Redstone, chairman of Paramount parent company Viacom Inc., publicly blamed Cruise's bizarre behavior — his unhinged love declarations for Katie Holmes on Oprah and elsewhere, his dogmatic defense of the more contentious aspects of Scientology, in particular the wholesale rejection of psychiatry and medication — for suppressing public enthusiasm for their Mission:Impossible III film, a "disappointment" at the box office, even though it generated over $390 million worldwide.

"As much as we like him personally, we thought it was wrong to renew his deal," Redstone told the Wall Street Journal. "His recent conduct has not been acceptable to Paramount."

Putting it even more bluntly, Hollywood legend Lauren Bacall slammed Cruise's behavior in an '05 Time magazine interview. "His whole behavior is so shocking. It's inappropriate and vulgar and absolutely unacceptable to use your private life to sell anything commercially, but I think it's kind of a sickness," she said. 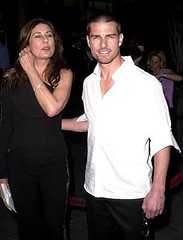 Apparently UA/MGM felt otherwise. "There is a complete alignment of interests in this deal," MGM chief operating officer Rick Sands told the AP today. "They are equity owners in the company and they share with us in the upside."

UA — home of such classics as Some Like It Hot, Midnight Cowboy, the Rocky, Pink Panther, and James Bond series, and Rain Man, which co-starred Cruise and won four Oscars in 1988 — has been mostly dormant of late, which Sands expects Cruise and Wagner to change dramatically, saying the pair is free to make big budget action films starring Cruise, and low budget arty flicks as well. "It really depends on what they as the creative executives want to produce," Sands said. "It's a real studio that we are reinventing."

Sands doesn't care about that wacky Scientology/love freak stuff either. "We believe Tom is a terrific creative force," Sands said. "If you look at his track record, he's generated huge box office and we believe the relationship of being a partner is different from a studio/actor relationship."

Sounding a similar note, MGM chairman and chief executive, Harry Sloan, told the New York Times that Creative Artists Agency, the Hollywood talent giant representing Cruise and a number of the industry's biggest stars, would be actively involved in United Artists’ future. "The studios and talent don’t trust each other. We need to start a dialogue."

"The talent friendly studio will be reborn as a place where producers, writers, directors and actors can thrive in a creative environment," sang out MGM's written announcement regarding the deal today.