It seems to be going upmarket, or at least holding its ground, which can only be a good thing.

The new Guardian: what do you think? 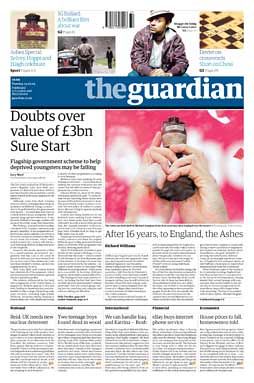 The new “Berliner” (mid-sized) Guardian has drawn much scorn from my workmates (but then I do work for the opposition). Although it is only early days, I’m, however, quite excited by it. As Stephen Glover wrote in The Independent, the question is “whether this is the same old Guardian repackaged in a new form, or whether it has become a different sort of newspaper, possibly more upmarket or even more Establishment in its feel”.

And I think the answer to that is that it seems to be going upmarket, or at least holding its ground, which in a British newspaper market fast streaming towards the populist can only be a good thing.

There can be lots of technical objections to the design – it is certainly over-busy at present, and I do think the interaction of the heads with sub-heads wiith bylines is going to have to be worked on, but the overall message is that this is a serious, even heavy, paper. I’d like to think that can work!

They are, however, I’d suggest, going to have a big problem in newsagents with it falling apart – and bagging is a very expensive option.

Yet this all might in the end up being academic. What really matters for the Guardian is that it is the only paper that really gets the web, as evidenced by its remarkably open blog about the development and implementation of the new design.

It has made itself an international brand through its huge and fast-acting web presence – I often notice how often purely American sources cite it – and through that in 10 years it might be the last “newspaper” left, when all of the dead-tree versions have long gone.