The big brassy strut begins – everyone knows this means the end. I wore out three copies of the single (bigger sound, brighter mastering) of Frank Sinatra’s “New York, New York,” putting the final exclamation point on literally thousands of parties in ’80s and ’90s. When Frank came in, the crowd knew it was really, really, no kidding, the last song and the party was over.

And what a great song: Sinatra’s last culture-spanning hit, capturing both the challenge of grabbing the attention of the Big Apple and the satisfaction of achieving it; a bold, bigger-than-life tribute from one legend to another, meeting as equals on the plane of song.

Anytime you hear a song that many times you come to feel a certain level of proprietorship and over time I felt free to rewrite that famous opening line, which I also felt free to sing over the microphone in my best Sinatra baritone: “Start spreading .. your legs.” The stunned expressions yielding to giggles were a source of deep satisfaction. 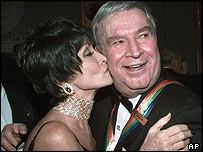 But I digress, the author of the REAL lyrics to “New York, New York” (“Start spreading the news …”) and the lyrics to smash musicals Chicago, Cabaret, Kiss of the Spider Woman, Zorba, and Woman of the Year, Fred Ebb, has died at (more or less) 76:

Ebb died Saturday at his home, said David McKeown, an assistant to composer John Kander, Ebb’s longtime collaborator. The lyricist was believed to be 76, although Ebb always was “sweetly vague” about his age, said director Scott Ellis, who worked with him on several shows.

With Kander, Ebb wrote the scores for 11 Broadway musicals, many of them for such leading ladies as Gwen Verdon, Chita Rivera, Liza Minnelli and Lauren Bacall. Minnelli was a particular favorite of the songwriting team, and over the years, the duo created special material for the performer’s solo appearances on Broadway and on television specials.

….”New York, New York” was written for the 1977 Martin Scorcese film of the same name, which starred Minnelli and Robert De Niro. The song became a standard, particularly after it was recorded by Frank Sinatra.

Together, the songwriting team won Tony Awards for their scores of “Cabaret,” “Woman of the Year” and “Kiss of the Spider Woman.” In addition, the 2002 film version of “Chicago,” directed by Rob Marshall, won the Academy Award for best picture.

Born in New York, Ebb went to school at both New York University and Columbia, where he received a master’ degree in English literature. The lyricist got his start in the theater writing for revues, one of which, “From A to Z,” had a short run on Broadway in 1960.

Ebb was brought together with Kander in the 1960s by music publisher Tommy Valando and one of their first collaborations, the song “My Coloring Book,” was recorded by Barbra Streisand.

The team was hired by producer Harold Prince and veteran director George Abbott to write the score for “Flora, the Red Menace,” starring a 19-year-old Minnelli. The show, which opened on Broadway in 1965, was not a success, but Kander and Ebb were signed to do Prince’s next musical, a show based on Christopher Isherwood’s “Berlin Stories” and the play “I Am a Camera.”

Called “Cabaret,” it opened in November 1966 and ran for 1,165 performances, immediately establishing Kander and Ebb as musical-theater songwriters to watch. The production, set in pre-World War II Germany, featured a huge mirror which reflected back into the audience and featured a sexually provocative master of ceremonies, played by Joel Grey, who taunted and teased the audience in song.

“Cabaret” has been revived twice on Broadway — in 1987 with Grey repeating his role as the lascivious master of ceremonies and again in 1998 by the Roundabout Theatre Company in an environmentally staged production which ran until early this year.

But “Chicago,” a sardonic, cynical take on murder and mayhem in the 1920s, came into its own with the 1996 revival, which featured Ann Reinking and Bebe Neuwirth. It is still running at the Ambassador Theatre, having recently passed performance number 3,250. [AP]

Cabaret is one of my favorite musicals: great songs, dripping with atmosphere and innuendo, an underlying sense of menace which contrasts beautifully with determined escapism within the cabaret, the music integrates seamlessly within the story. Astonishing.

Ebb was inducted into the Songwriters Hall of Fame in 1983.