A study used the US paper currency tracking website WheresGeorge to simulate the spread of disease.

Researchers Hope “Cashless” Society Is Far Into The Future

On Wednesday, January 25, physicists from the Max Planck Institute in Göttingen, Germany, and the University of Santa Barbara, California, released a report of a study that used the US paper currency tracking website WheresGeorge to simulate the spread of disease. Ironically, this was only a few weeks after the TowerGroup released a ViewPoint Report indicating that the long-awaited cashless society is nigh. 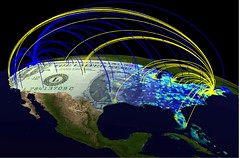 WheresGeorge users voluntarily enter information about the paper currency in their possession, and then spend the bills as they would normally. Usually the bills stay within the same geographic region in which they are spent, but some eventually travel great distances. The researchers used data scraped from the site to model the human-to-human transmission of infectious diseases. According to Hank Eskin, creator and owner of the site, the researchers are interested in getting a much larger data set to continue to study human traffic patterns, and he is eager to assist them.

The numbers of visitors to the site doubled and tripled over the next few days as news organizations picked up and ran the story, creating a bit of a Slashdot effect that left the site limping, but it has since recovered and added about 10,000 new registered users to the 3.3 million already on the rolls. I hesitated to post this story on Blogcritics, but now that the initial flurry has died down a bit, it seemed safe enough.

I’ve been an active member of WheresGeorge.com for over five years, and it warms my heart to know our little hobby has a purpose in addition to providing entertainment. Pull out your wallet or purse right now and enter the bills you have in it. Do it for Science. As one Georger put it, “For years I have been laughed at for this hobby and now I can point to this [report] as a practical use for what we do.”