This album gives me hope for the future of pop-rock.

There is a line in the lyrics of The Apples In Stereo tune "Sundial Song" that goes, "you circle me and try to pin me down." The metaphor aptly describes the experience of trying to pin a genre label on the band's recent release, New Magnetic Wonder. This album is quintessentially The Apples In Stereo — a band that straddles the line between electronica and sunny pop-rock, and only occasionally do they lean in fully on one or the other.

The Apples In Stereo came together as a band fourteen years ago in Denver, Colorado. Guitarist/vocalist Robert Schneider has been the main creative force in the band, which consists of guitarist John Hill, bassist Eric Allen, and until recently, vocalist and percussionist Hilarie Sidney. New Magnetic Wonder is their eighth full-length album, in addition to many singles and EPs. It is also their most ambitious recording to date.

The album clocks in at a little over 52 minutes with twenty-four tracks. Many of these tracks are electronic instrumentals created by Schneider using multi-layered tracks and mathematics. That's right, mathematics. 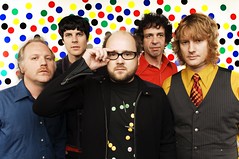 Musical art aside, New Magnetic Wonder is a fantastic pop-rock record. "Can You Feel It?" repeats the title of the song in the chorus and adds the line, "It makes you feel so good." It certainly makes me feel good when I listen to it, and the fun doesn't stop there. Every track on the album grabs my attention, including the quirky instrumentals. I find myself humming little bits and pieces of it at the most random times, and it's a rare album that will have that much of an effect on me.

For some people, pop-rock has become trite and canned, and it is often used as a derogatory label by indie hipsters. The Apples In Stereo are a shining star leading the masses to the truth and goodness that is intelligent pop-rock. They have not sacrificed creativity and art to produce an album that is very commercially viable, and it gives me hope for the future of pop-rock.

Be sure to catch The Apples In Stereo later tonight on Conan O'Brien. If you miss it, don't despair. The band will be on tour all around the US over the next couple of months. Also, here's the video for "Energy," the first video from the album and actor Elijah Wood's directorial debut: