Researchers at the Georgia Institute of Technology have developed a prototype digital camera “neutralizing” system that can locate digital video or still cameras within a given area — like a movie theater — and then project a thin beam of white light that “blinds” the camera.

The prototype device works because a digital camera’s image sensor — a charge-coupled device (CCD) — is retroreflective, which means it sends light back directly to its origin rather than scattering it.

The prototype uses two cameras feeding into a computer to look for reflected light from a camera’s CCD. Then, using data from the system cameras, the computer pinpoints the location of the offending camera.

“We’re at a point right now where the prototype we have developed could lead to products for markets that have a small, critical area to protect” including “government buildings, industrial settings or trade shows,” said Gregory Abowd, leader of the project at Georgia Tech. “Then we’re also looking to do additional research that could increase the protected area for one of our more interesting clients, the motion picture industry.” 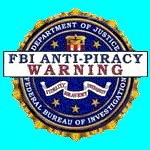 Sounding remarkably like an MPAA podbot, team member James Clawson said, “Movie piracy is a $3 billion-a-year problem. If someone videotapes a movie in a theater and then puts it up on the web that night or burns half a million copies to sell on the street – then the movie industry has lost a lot of in-theater revenue.”

An MPAA study claims that movie piracy in China alone cost the film industry $2.7 billion in 2005.

Once that system is relatively fail-safe, reports indicate more radical elements within the film industry are agitating to have the camera-blinding white light upgraded to either a death laser, or, for the more Biblically-inclined, a Sodom and Gomorrah-style pillar-of-salt ray.

False positives are a particular concern under these less forgiving circumstances, although in the current (wimpy) system, researchers say light beam energy levels would be low enough to preclude any health risks to evil camera operators.