Jerry Hall – master thespian, or at least a really fast one:

The theatrical marathon, one of a series of events promoting London as a tourist destination, also won Hall a place in the Guinness Book of Records.

In just under 3 1/2 hours, the 47-year-old former partner of rocker Mick Jagger graced the stage in “Phantom of the Opera,” “Les Miserables,” “Fame,” “Blood Brothers,” “Anything Goes” and “Chitty Chitty Bang Bang.”

Her parts ranged from a Liverpudlian housewife in “Blood Brothers” to an elegant extra aboard a 1930s ocean liner in “Anything Goes,” in which she got to sing and dance.

….”It’s for the London theater industry, which I think is a fabulous idea,” she said afterward. “Also to be in the Guinness Book of Records is amazing – my children are so impressed.

“And the best thing is, I get to put six West End plays on my resume.” [AP]

Hall has appeared in “The Graduate” and “Benchmark” in the West End. She is in talks about a starring role in a West End musical. 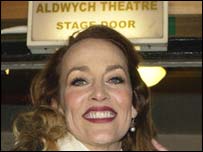