New York was too important a mercantile center to risk leaving vulnerable to an alliance between the Confederacy and the British.

A Visit to Fort Totten

A few weeks ago we had a special bus tour of Fresh Kills, the huge Staten Island landfill, now closed, capped, and being planted in preparation for eventual conversion to parkland, but not generally open to the public at this point. This weekend, another Urban Park Ranger took us through the old fort at Fort Totten, a Civil War-era granite fortress on the Willets Point peninsula on the north coast of Queens.

A short distance across the water from Fort Totten, on a spit of land jutting south from the Bronx and now in the shadow of the Throgs Neck Bridge, is Fort Schuyler, which dates from the 1830s and is now the SUNY Maritime College. The two forts were built to defend against a British naval attack on New York City from the east via Long Island Sound.

In the War of 1812 the British had burned Washington, DC, not New York. But the former New Amsterdam was too important a mercantile center to risk leaving vulnerable. During the Civil War the North feared a British alliance with the Confederacy. Hence the sense of urgency. Fort Totten was hastily built – as far as it went – in 1862.

New York City's basic character – tolerant, money-centered, socially and ethnically polyglot – hasn't changed since the 1600s. It's still the financial nerve center of the nation, for one thing. That makes it target number one. The feared British attack never came, but Osama bin Laden took up the gauntlet in 2001, with nightmarish results. 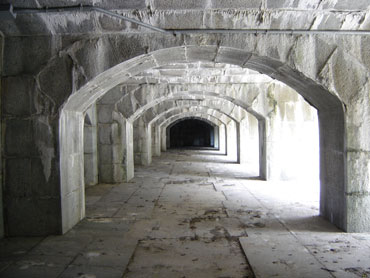 Archways at Fort Totten are made of huge granite blocks quarried in Maine. The white "drippy" stuff is limestone. The floor is made from the same bluestone as you can still see on some sidewalks in neighborhoods like Park Slope, Brooklyn.

We bounced back from that. But today Wall Street has dug itself another grave, this time by outsmarting itself with smart-ass credit tricks. (Good thing we rebuilt DC after the War of 1812 so the Feds could bail out the financial firms in 2008.) New York will climb out of this hole too, of course – we always do. Four centuries of history say so.

So old Fort Totten was never used. In fact, it was never finished. Though it was a state-of-the-art fort at the time, military technology was changing very fast. The invention of rifled cannons made even the thick granite walls of a fortress like Fort Totten penetrable. Like a 21st century electronic device, Fort Totten was out of date before it could even go online. 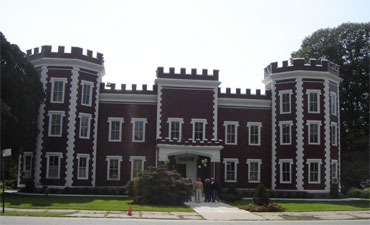 The old Officers' Club, almost completely restored, is now the home of the Bayside Historical Society.

However, the site became extremely important for defense and research. Underwater mine technology, for example, was developed there. (Mines were deployed off Fort Totten only once – during the Spanish-American War.) During World War II, Fort Totten became the headquarters of the Anti-Aircraft Command of the Eastern Defense Command, and later the HQ of the North Atlantic region of the Air Transport Command. During the Cold War, it became headquarters for more than half the country's Nike missile sites. 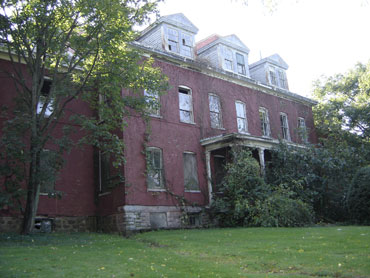 This old house… not so restored.

Today an Army Reserve Command remains, and the Fire/EMS department uses part of the site for training, but much of it is a park. Some of the buildings, like the Officers' Club, which dates from 1870, have been restored to glorious condition, but on the whole the site has that tumbledown, half-abandoned feel of a left-behind presidio. It has grand officers' houses, humbler dwellings, a chapel, and named streets, and people are working and playing there, but no one really lives there anymore, so it feels half-abandoned.

Over time, if will and budget allow, Fort Totten Park will be fully repurposed for recreation. But in the meantime it stands as a half-ghostly monument to the culture and achievements of the United States Military, and at the same time a demonstration of the way the human animal will instinctively repopulate and re-use a patch of land whose old function has passed.