Tom Cruise continues his tear through the media machine, promoting his new film War of the Worlds, which opens nationwide tomorrow. 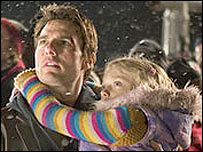 When we last spoke of such things he sparred with The Today Show’s Matt Lauer on matters of religion and psychopharmacology, calling psychiatry a “pseudo-science.” He also blathered on shamelessly about Katie, but no one cares about that anymore.

This morning he appeared on CBS’ Early Show with Jess Cagle:

Cagle: Most people are reluctant to talk about religion, or anything controversial, when it is your job to be likable to mass number of people around the globe. Why, especially in recent years, have you become so vocal about Scientology, about psychiatry, which you’re against?

Cruise: Communication is the universal solvent. That’s why I talk about it. What I believe in is that people should be able to think for themselves, and they should be able to make decisions, based on information, on being informed. I don’t believe that children should be forced on drugs. I think parents should be informed on the effects of these drugs. 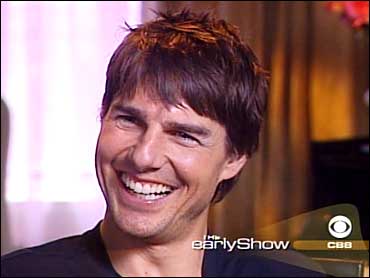 Cagle: I think what upsets some people when you talk about this, what upset Brooke Shields, for example, is that you imply that someone’s own experience with psychiatric drugs was, they were mistaken by the way it helped them; that other studies that are done that contradict what you believe are erroneous

Cruise: What do you mean?

Cagle: Other studies that show that maybe Ritalin does help some kids.

Cruise: When you see a study done, you have to look and see who did the study. When someone’s on these psychiatric drugs, they have to try and step off these drugs, and I’ve stepped people off these drugs, Jess. They can go into seizure. All right, it’s easier to step someone off heroin. It’s more dangerous. They need a medical detox on these drugs.

Cagle: And yet some people have said they’ve taken them for a while, and then they’ve gotten off them, and it’s helped them through a rough time.

Cruise: Jess, it’s a point of, you look at something and you go OK. I’ve been on the other side of that, when people’s lives have been torn apart, where you talk about suicides, where we’re looking at now Ritalin is street drug; it’s a study drug, because it’s an amphetamine. Look, you don’t have to believe me. I’m just saying, look at the data and where does that data come from? Now you need to evaluate” What is help, Jess? Is “help” that that person will sit there quiet? Did you really get to the root of the problem?

I guess I just don’t get what Cruise is trying to say: you shouldn’t try to correct a chemical imbalance in a person’s body that causes them pain, suffering and makes it difficult for them to function? Why, Tom, why? Is it you, or is it L. Ron Hubbard speaking through you?

The American Psychiatric Association (APA), which represents more than 36,000 physicians specializing in the diagnosis and treatment of mental illness, has similar issues with the querulous movie star. In a statement, the drug-dispensing brain-doctor collective struck back at Cruise.

“It is irresponsible for Mr. Cruise to use his movie publicity tour to promote his own ideological views and deter people with mental illness from getting the care they need,” said APA President Dr. Steven S. Sharfstein.

The release continues, “Over the past five years, the nation has more than doubled its investment in the study of the human brain and behavior, leading to a vastly expanded understanding of postpartum depression, bipolar disorder and attention-deficit/hyperactivity disorder.

“Safe and effective treatments are available and may include talk therapy, medication or a combination of the two. Rigorous, published, peer-reviewed research clearly demonstrates that treatment works. Medications can be an important and even life-saving part of a comprehensive and individualized treatment plan.

“Mental health is a critical ingredient of overall health. It is unfortunate that in the face of this remarkable scientific and clinical progress that a small number of individuals and groups persist in questioning its legitimacy.”

“We know that treatment works,” said APA Medical Director James H. Scully Jr., M.D. “And since safe, effective treatments are available, Americans can have what everyone wants – healthy minds and healthy lives.”

What say you, Tom?