Rapper-actor-raconteur-filmmaker-linguist–Chrysler pitchman Snoop Dogg was arrested along with four (or five, depending upon accounts) associates at London’s Heathrow Airport on the quaint British charges of “violent disorder and affray” and spent the night at a West London police station after a melee in the British Airways business lounge. 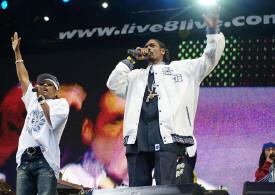 The 34-year-old rapper (born Calvin Broadus, Long Beach, California) was traveling with a contingent of up to 30 people from the U.S. to South Africa to perform in the People’s Celebration extravaganza in Johannesburg tonight. The layover in London turned to pandemonium when Snoop’s throng, most of whom were flying coach, tried to buffalo their way into the BA business lounge but were refused entry and became “difficult.” 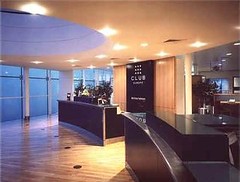 A BA spokesman said, “There was an incident involving a group of passengers at our lounge where some passengers were rude and abusive to our staff and that’s something we do not tolerate.”

A bit of a culture clash, fo’ shizzle.

As many as 20 police with 10 dogs stormed on to the scene, which eventually included broken champagne and/or whiskey bottles, Snoop bellowing obscenities at any and all who would listen, and seven injured officers including one with a fractured hand. It is unclear whether the officers’ arrival accelerated or decelerated the conflict.

A witness told The Mirror, “It was absolute chaos – there was broken glass everywhere and it looked like it was on the brink of turning really nasty. It wasn’t clear what sparked it but Snoop was livid.”

Scotland Yard reported, “Police were called at 6pm last night to reports of a disturbance involving 30 people in a business lounge at Terminal 1. The party was told that they would not be permitted to board their flight and officers then attempted to direct the group to baggage reclaim. A number of the group became abusive and pushed officers.”

A South African fan was quite displeased and said so on Snoop’s website:

Just this week it was announced that Simon & Schuster imprint Atria will publish a novel by Snoop in October called Love Don’t Live Here No More, in which the former Crip associate and convicted drug offender would “show, particularly his female fans, another side,” according to Atria publicist Kathleen Schmidt.