Sherry Frasier's brooding vocals and topical subjects will be well received by fans of Portishead or Sleater-Kinney.

Two Ton Boa is essentially the work of one woman, Sherry Fraser. She writes and arranges all of the songs, and the pounding dual bass sound was her idea. That element is what sets Two Ton Boa apart from other bands in the dark and introspective indie rock subgenre. Even with the despair of Fraser's voice, the listener is carried through by the groove of the bass guitars.

The new CD Parasiticide follows up on the eponymous EP from 1999. Some tracks are so good one must wonder why Fraser has been keeping these songs from us for the past seven years. The album starts off with the strongest song in the collection and follows it with several contenders, but after the midway point, it begins to slide into darker and less driving rhythms. It is a little disappointing, but it also serves to make the really engaging songs stand out even more.

"Cash Machine" is by far the best song on the album. Musically, it contains the essence of Two Ton Boa. The pounding bass and percussion provide the energy to move the song forward, leaving the melody and expressiveness to Fraser's vocals. Lyrically, the song exemplifies the word pictures and oblique metaphors that are scattered throughout Fraser's writings. 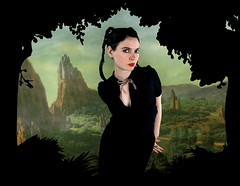 The song is an allegory for a situation many Americans find themselves in: trapped in the endless cycle of credit card debt furthered by the complicity of the banks and companies that issue the cards. "Nickel and dimed / It surely comes as no surprise / I can't afford your paradise" Fraser creatively uses industrial/factory sounds to illustrate the message of the song. She also uses her own artwork to illustrate part of the visual feast that is the video for the song.

Other great tunes on the album are "HERarchy" and "Gumshoe." The latter begins with piano and vocals that seem to have been taken from an old Victrola, and then the song shifts into the normal Two Ton Boa sound. The listener is presented with a story of innocence twisted by a parasitic ex-lover. "HERarchy" is another song of innocence lost, but in this case the perpetrators are the protagonist's childhood peers. The story is one familiar to anyone intimate with the social politics of twelve year old girls; they are friends one minute and in the next they are stabbing each other in the back. "HERarchy" uses the words themselves as added percussion much the way that they are used in hip-hop.

Fraser's brooding vocals and topical subjects will be well received by fans of Portishead or Sleater-Kinney. Parasiticide is a solid album, from the songwriting to the production, and worthy of any music lover's collection.