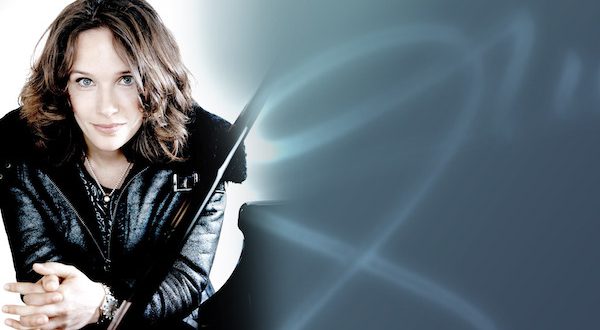 Pianist Hélène Grimaud returns to Mozart after nearly a decade with her new album The Messenger. The set pairs well-known pieces by Mozart with works by Valentin Silvestrov in which the contemporary composer channels – or, let’s say, feeds off of – Mozart and other great classical artists. The result is twofold. While perhaps not a totally fresh perspective on Mozart’s Fantasias in D minor and C minor and Piano Concerto No. 20, her performances certainly offer a vivid one. Secondarily, it is, for me at least, an introduction to a modern composer whose work elicits mixed feelings in me.

Grimaud comes up with an effective and playful gimmick at the start. She opens the album with the ineffable and unfinished D minor Fantasia. But instead of playing the usual ending by August Eberhard Müller, or composing her own as Mitsuko Uchida did, she leaves off right where Mozart lifted his pen and – joined by the Camerata Salzburg – segues into the Concerto No. 20.

This turns the Fantasia into a prelude. In addition to establishing the pianist’s newfound enthusiasm for Mozart, the piece thus prepares the way for a concerto so powerful, so densely packed with proto-Sturm und Drang earworms in all three movements, that it has always been among his most beloved works.

A recording of the Piano Concerto No. 20 formed an essential piece of my own listening childhood. So it’s a pleasure to report that this rendition is both confidently delivered and deeply felt. In the Mozart selections on The Messenger Grimaud found what she calls the “unstable energy beneath the vivacious, effortless veneer.” According to Misha Aster’s liner notes, these rare minor-key Mozart efforts were the vehicle for the pianist’s discovery (long delayed, I would add) that Mozart “was more than perfect, Apollonian phrasing and elegant style.

“‘Despite this sense of natural ease,’ Grimaud explains, “there is a profound instability at the heart of Mozart’s music, an unmistakable absence verging on slight hysteria – a ceaseless, erratic, painful yearning for love…it…took many years of inner cultivation to fully recognize those burning, unpredictable currents rippling beneath the transcendental beauty. That is when playing this music became a necessity.'”

All that being said, Grimaud’s renditions of Beethoven’s cadenzas are just as impassioned, in a churning, questing way that’s so appropriate to that composer. Just brilliant.

Mozart may not have been terribly fond of minor keys, but he made two very different uses of them in the pensive, bittersweet D minor Fantasia and the dark, sometimes deceptively childlike, but complex C minor written a few years later. “Unstable energy” is written all over this piece, scratched so deep that it almost hurts, and Grimaud lays into it hard. It’s a most impressive close to the album’s Mozart sequence.

The Silvestrov selections engage with Mozart directly yet keep a diffident distance, an effect achieved literally in the faraway-sounding arrangement of “The Messenger” for piano and strings. There’s an uncomfortable merging of Mozartian gestures, figures, and quotes with classical-crossover tropes, or what I could less generously describe as “classical-lite” heart-tugging.

The piece’s dominant characteristic and main point of interest is its slowing of classical-style (and specifically Mozartian) motion and emotionality to the point of near-deconstruction. This works better in the version for piano solo that closes the album. Here, space resounds like real space; the sense of a surrounding vacuum is almost palpable, and you feel the physicality of the pianist and piano. Grimaud’s sensitivity, above all to space, is as evident as ink on paper.

Silvestrov dials in Schubert and Wagner in the three short pieces of his “Two Dialogues with Postscript” for piano and string orchestra. A slow-motion version of the “Kupelwieser Waltz” leans distressingly hard on Schubert’s one unexpected chord change, the honey so abundant the piece resembles one of those modern-art paintings where the artist has laid the paint on so thick the canvas becomes a sculpture. “Postlude,” after Wagner, is both schmaltzy and faintly dissonant – and is Grimaud playing the inside of the piano at the end? I do appreciate the piano’s startling entrance at the end of the final piece, “Morning Serenade.”

All these Silvestrov pieces don’t add up to very much in my book. But whether they appeal to you or not, we can all be grateful to them for their role in leading Hélène Grimaud back to Mozart. The Messenger is available now from Deutsche Grammophon.

The applause that followed felt almost like an extra musical movement, that's how much I enjoyed hearing it. Why? It signals the continuing robustness of the audience for this great music.