If you are looking for a Christmas album with dramatic orchestration and dulcet vocals, then you have found it.

Celtic Woman is the creation of composer and director David Downes and producer Sharon Browne. They pulled together four young Irish female vocalists (Chloe, Lisa, Meav and Órla) and a fiddle player (Mairéad) to create the production. And this is very much a production entitled "Celtic Woman," rather than a group of Celtic women, which may confuse unaware listeners.

In addition to their eponymous release in 2005, each member of the group is featured on a solo album. Just in time for the holidays, they have released their second collective album, A Christmas Celebration.

Aside from the members and composer being Celtic themselves, there is very little about this album that sounds Celtic to this American ear. If you are looking for an album of Christmas or winter songs sung in Gaelic, or even with a noticeable brogue, this is not the album for you. However, if you are looking for an album with dramatic orchestration and dulcet vocals, then you have found it.

A Christmas Celebration is a collection of traditional Christmas hymns and carols. It begins with the quiet and reflective songs "O Holy Night" and "Away In A Manger," but the excitement picks up spectacularly on "Ding Dong Merrily On High." The choir singing a "ding dong" descant behind the vocals of the women sends shivers of joy down my spine every time I hear it. This effect is replicated on "Carol of the Bells," which is generally guaranteed to make me tingly when I hear it. The percussive element in the vocals on the chorus "Christmas Pipes" makes that song stand out, as well. 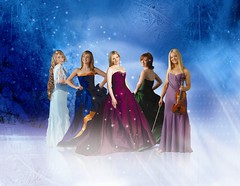 "Silent Night" is a song destined to be translated and sung in every spoken language. Meav sings it sweet and clear in both Gaelic and English.

The a cappella arrangement of "The Wexford Carol" is another spine-tingling track from A Christmas Celebration. The blend and tone of the vocals are so perfect that at times it seems almost supernatural. When the last note is sung, one is left sighing in pleasure.

Then all hell breaks loose with the first crash of the cymbals on the jazzy arrangement of "Let It Snow!" that closes out the album. This is the only track that feels out of place, although it is understandable that the producers would want to emphasize that Celtic Woman has a broader range of styles than what one might think. However, it still feels wrong to me, and is likely to be regularly skipped on shuffle, or removed entirely from rotation, depending on the mood of the listener.

On the whole, A Christmas Celebration is a fine addition to the assortment of seasonal music. I highly recommend it to anyone who is weary of hearing tired pop/rock renditions of carols and is looking for something fresh yet reverent.