Think of this album as a collection of art house films told in three to five minutes each.

On her first album, Infomercial Gasmask, Alū used elements of electronica to build the foundation upon which her rich, warm vocals rested. Lobotomy Sessions goes in a slightly different direction, drawing more from jazz and cabaret to create a new soundscape.

The first track, "Buzzin' In My Brain," begins with a slow tap rhythm that is gradually joined by an upright bass, strings, and subtle percussion. The latter three are the elements of accompaniment that will be used throughout Lobotomy Sessions. Sometimes sultry, sometimes whimsical, but always accompanied by equally sultry or whimsical vocals and lyrics.

Don't let yourself be lulled by the first few tracks into thinking you have figured out which box in which to drop this album. Pulling the sitar out of the instrument closet, Alū merges Southeast Asian rhythms, jazz, and electronic dance beats to create a song that refuses to be contained by genre lines ("Recluse"). 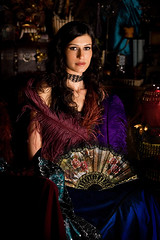 "The Metrosexuals" is a fine example of the whimiscal, tongue-in-cheek lyrics that are scattered throughout Lobotomy Sessions. "The metrosexuals are coming to town. Boy, give me back my lip-gloss." The musical accompaniment implies some dark danger is lurking around the corner, and it's quite likely that his sleeves have been "tjuzed."

Each of the ten tracks are what some have described as "cinematic soundscapes." Think of them as an art house film told in three to five minutes. Horror, science fiction, political commentary, drama… whatever your movie type of choice, there is likely to be a track on this album that draws on elements of it. It's a veritable film festival of sound.

The liner notes indicate that Alū is responsible for writing, producing, and performing every track on Lobotomy Sessions. If that is true (and I have found no evidence to the contrary), then in addition to being a creative songwriter, Alū is also an accomplished multi-instrumentalist capable of producing a textured and layered sound without leaning on the talents of others. Regardless of what one may think of the results, that kind of creativity and skills should be applauded.

The unoriginal is specifically excluded.