They were about more than the hair.

Music Review: A Flock Of Seagulls – We Are the ’80s

The first thing you might remember when you think of the early '80s synth rock band A Flock of Seagulls is the band members' hairstyles. It may not surprise you to learn founding members Mike Score, with his blond swooping tresses, and his brother Ali were hairdressers before they formed the band in Liverpool, England in 1979. But the look was not the only distinct thing about the group. Their sound, comprised of electronic drums and synthesizers, put a new face on European alternative music and when MTV picked up on them and their single "I Ran (So Far Away)" it was the beginning of what would be a relatively short-lived run. 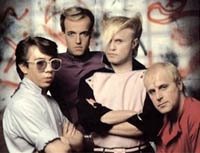 The band's first single was actually released on an EP 1981, and became an underground hit in dance clubs in the group's native England, not surprising given the up-tempo danceable beat. It did garner them enough attention to be picked up as an opening act on Squeeze's American tour. "Telecommunication," also on the band's first self-titled album, is beat heavy and, like all of their music, all synthesized. To me, it's almost as if the song is a bridge between the disco of the '70s and the early electonica that began in the '80s. It's just as light on profound lyrics as it is heavy on the digitalized beat.

In 1982, the second single and the song they will forever be remembered for, "I Ran (So Far Away)", hit both American radio and MTV and as with so many other bands of the early '80s, success on the up and coming Music Video Channel translated to radio success. The song quickly ascended to the top ten, though ironically, it didn't even break the top 40 in England. Hearing it again now, it seems very typical of the genre and time, but I remember seeing the low-budget video back in '82 and thinking the sound was different than anything currently coming from my radio.

Though "I Ran (So Far Away)" is the song first thought of in conjunction with A Flock of Seagulls, "Space Aged Love Song" (which was featured in the Adam Sandler movie The Wedding Singer) and "Wishing (I Had a Photograph of You)" are better constructed and have a nicer flow and sound. In both singles, the electro-synth is less the focus and they have a light romantic feel. Lyrically there is more going on and there is a depth not present in "I Ran" and "Telecommunication." The main thing keeping "Wishing" connected to the other songs on the disk in theme and style are the interlacing bridges delivered by the keyboard between verse and chorus. 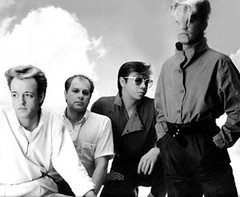 There are two songs on this compilation from the band's third album, The Story of a Young Heart, which was released in 1984. This album and the single from it, "The More You Live the More You Love," would be the last two appearances A Flock of Seagulls would make on American charts. The song is reminiscent of the earlier tracks, specifically "Space Aged Love." As new and refreshing as they were coming on the scene in '81, by '83 it was a stale sound — or maybe there just wasn't enough difference between the albums to keep the band interesting.

Also included on this CD from that third album is "Remember David." The song is more up-tempo with a stronger focus on the rhythm and guitars than the signature synthesizers. It is that interesting change that is lacking from "The More You Live, The More You Love," but perhaps it was a bit too late to save the band in terms of radio and MTV airplay.

"Heartbeat Like A Drum" is a distinct sounding track on We Are the '80s and the only song from the band's last album, Dream Come True. It is reflective of the changes the band went through just prior to this 1986 release. Paul Reynolds had left the group and his guitar work is sorely missing on the track. It has a clunky feel and the soft dreamy feel that is present on the other songs on this collection and their first three albums is just not there.

As quickly as A Flock of Seagulls splashed onto the American charts with their synth-rock sound, their success was over. Their four years at the top are highlighted in the thirteen tracks on We Are the '80s and is a must-have disc for those who grew up with their sound or who just wanted the hair.

We Are the '80s is a series of CDs recently released in a co-venture between Legacy Recordings (Sony BMG) and VH1. The series features artists who were topping the charts and were staples on MTV throughout this decade. Stay tuned to Blogcritics in the coming weeks for reviews on other CDs in the series including Bow Wow Wow, Eddie Money, Loverboy, and Rick Springfield.