The most striking thing about Lindsey Buckingham's new concert DVD, is the revelation of just how amazing — yet underrated — a guitarist he really is.

The most striking thing about Lindsey Buckingham’s new Songs From the Small Machine – Live in L.A. concert DVD, is the revelation of just how amazing — yet underrated — a guitarist Buckingham really is.

Both with Fleetwood Mac and as a solo artist, Lindsey Buckingham most often gets his props — and rightfully so — as a songwriter, and perhaps to a slightly lesser degree as a singer. But on this DVD, and particularly on the five solo acoustic songs that open the set, Buckingham really lets things rip on the guitar. 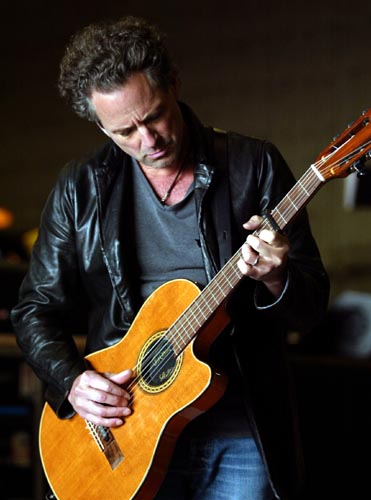 Thankfully, the camera work here wisely zeroes in on all the action. There are several close up shots that reveal Buckingham’s intricate style of hard finger picking. But the best stuff comes when Buckingham is strumming like a maniac on songs like “Big Love,” and especially during an intense version of “Go Insane,” where he essentially turns the pop song inside out.

Who said acoustic sets at a rock concert were supposed to be for bathroom breaks? Don’t tell that to Lindsey Buckingham.

By the sixth song, the shiny pop gem “Under The Sun,” Buckingham is joined by his band for several songs from his great new Seeds We Sow album. Calling these “new songs from the small machine” (as opposed to the “big machine” that is Fleetwood Mac, and hence the DVD title), Buckingham likewise shows his gift for writing intelligent, well crafted pop and especially his ear for a great hook, to be as sharp as ever here. If anything, songs like “Stars Go Crazy” and “That’s The Way Love Goes” are just a natural extension of the same smart pop sensibilities of his work with the “big machine.”

But even on the Fleetwood Mac songs, Lindsey Buckingham finds new ways to keep things fresh. On “I’m So Afraid,” the already bluesy song takes on an even more foreboding tone, thanks to an even slower arrangement, and a beautifully haunting vocal from Buckingham. The song also serves as the launchpad for another stratospheric guitar solo, and the camera once again captures Buckingham’s unique picking technique up close.

The arrangements on other Fleetwood Mac classics like “Go Your Own Way” and “Never Going Back Again” are more familiar sounding. But Buckingham’s strong vocals and guitar playing still make them standouts. The whispered vocal delivery on “Never Going Back Again” is particularly sweet. On “Go Your Own Way,” he projects his vocals to the crowd at L.A.’s intimate Saban Theater as though he were playing a sold out arena.

The only bonus feature on Songs From the Small Machine – Live in L.A. is a new Lindsey Buckingham interview. But the concert itself is beautifully filmed — especially when the closeups reveal a few of the master’s secrets. The Dolby Digital 5.1 sound mix is likewise flawless and squeaky clean.

In short, Lindsey Buckingham’s Songs From the Small Machine – Live in L.A. is another home run from the fine folks at Eagle Rock.

A review of Fleetwood Mac's "The Alternate Collection," plus a Willie Nelson concert CD/DVD set and a new edition of Cat Stevens's "Catch Bull at Four."