Paris in 1919 had seen the greatest destruction known to the world at that time come to its very suburbs. The battlefields of World War One were so close that men on leave could take taxis to the front. Perhaps it was this proximity to death and destruction, or maybe just a chance meeting of minds, but Paris became home to one of the greatest outbursts of human artistic creativity since Renaissance Italy.

The city had always been considered the centre of the artistic universe for Europeans, but at the end of World War One there was an explosion of artistic expression that was only quelled with the outbreak of World War Two. The twenty-year interval between conflicts would see those who would shape artistic expression for the twentieth century all gather within the confines of a few square blocks.

Writers, philosophers, painters, dancers, musicians and sculptors worked, loved, fought, drank, and did drugs; all of them determined to cram as much living as possible into every single moment. Having witnessed how easy it was for a life to be here one day and gone the next, no one wanted to risk not having done as much as possible.

Many of us have heard of the more famous inhabitants of the artist’s quarter: Picasso, Stien, Jean Cocteau, Hemmingway, and F. Scott Fitzgerald. But there were other, equally important, though not as renowned, men and women striving to express the emotional turmoil of the period. One of these was the sculpture/painter Amedeo Modigliani.

Supposedly, Modigliani epitomized the figure of the romantic artist struggling with passion and madness. Whether it was an artifice created on his part or not is open to debate, but what is true and known is that he lived, loved and indulged in drink and drugs excessively. While the others around him were influenced by the potential for death and destruction, Modigliani carried within him a death sentence.

As a child he had contracted tuberculosis, which in those days meant your days were numbered. Most likely it was this that inspired the excesses that shortened his life, but enriched his days. He did in fact end up dying in 1920 of tubercular meningitis.

In Mick Davis film Modigliani, it’s the romantic figure of the artist wrestling with his demons who is the star of the film. It is the last year of his life, 1919, and he and his lover Jeanne have one child and are expecting another. His insistence on playing the role of the romantic artist has alienated him from the elite of the Paris art scene, including such luminaries as Picasso and Jean Cocteau. 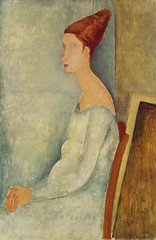 What the truth to the conflict is, I don’t know, but the film depicts Modigliani and Picasso as continually confronting each other. Picasso has already achieved success and recognition and lives in some comfort, while Modigliani continues to live in a garret, having to steal for food, drugs, and wine. Whether it’s jealousy alone that motivates him, or a desire to stick a pin into the bubble of Picasso’s enormous ego, Modigliani goes out of his way to aggravate his more famous contemporary.

It’s a running battle throughout the movie, culminating in a competition sponsored by the Salon D’Artists, with a prize of 5,000 francs being awarded to the winner. Of much more importance, of course, will be bragging rights for being judged the best painter in Paris.

Only once is there a truce, a drive into the country, where Picasso takes Modigliani to visit Renoir. On their return to Paris, we are given a glimpse of the real respect that they hold for each other; what has been spiteful until now is replaced by gentle teasing. However, as if they were actors performing a role, on their return to Paris they revert back to form.

In the movie, Modigliani’s relationship with Jeanne Hebuterne has been idealized along the star-crossed lovers line. The poor Jewish artist in love with the middle-class Catholic girl with the disapproving father; although this is true, they were also legendary for their public brawls.

While Mick Davis may have played fast and loose with the truth (at the beginning of the movie they tell you they have) he has created a movie that captures, better than any other, the close proximity of creative genius to madness and excess. To feel so much that you are inspired to create is a dangerous business. Extremes of emotions can take the soul to the highest points of heaven and the deepest pits of hell.

For an actor to be able portray this without him slipping into excess takes extreme discipline and a unique command of his craft. I have to admit that I’ve never been the biggest fan of Andy Garcia, but in this movie he is spectacular. While always ensuring that we are cheering for Modigliani to succeed, he is also unwavering in his depiction of the less savoury aspects of the man.

In fact the cast is universally gifted, from the smallest supporting player through to the leads there is no weak link to tarnish this great work. Elsa Zylberstein as Jeanne, Omid Djalili as Picasso, and Hippolyte Girardot as the artist Maurice Utrillo stand out in particular for their gifted performances.

The truly amazing thing about this movie has been Davis’ ability to capture the atmosphere of Paris during this period. From the decadent parties, to the genuine passions of the artists, he gives us a front row seat to one of the most important eras in art history of the modern world.

There is a sequence of shots near the end of the movie in which he focuses on the five artists who are competing for the Salon D’Artiste prize. He quickly cuts form artist to artist: in mid brush stoke, in frustration, in contemplation and in frenzy, as they struggle with transferring what their mind’s eye sees on to canvass. These little snippets of film do more to show the artistic process than almost anything else I have ever seen depicted on film.

Mick Davis’ Modigliani is a movie well worth seeing for both the fine performances of all involved, and for its recreation of one of the most exciting periods of artistic history.
ed/Pub:NB