And the film has a second strong weekend at the box office - insolence pays? 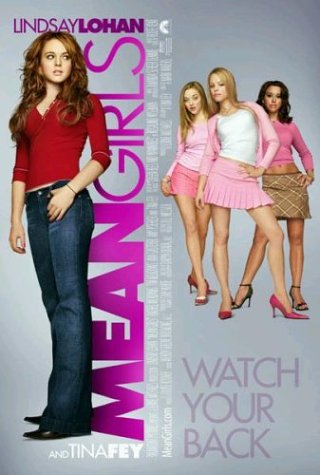 Our pals at Buzztone are behind this online-only marketing deal with iTunes:

The only place to find the movie’s official soundtrack is at Apple iTunes, where it’s being offered as a digital download for a limited time. Over the next six months, Mac and PC users can purchase the tracks featured in the film at the popular online store.

The digital soundtrack includes exclusive tracks from memorable scenes in the film. The soundtrack features tunes from Blondie, teen rocker Katy Rose, electro-punk band Peaches, Boomkat, Anjali and Nikki Cleary, along with tracks from the film performed by Lindsay Lohan and her talent show comrades of “Jingle Bell Rock,” plus “The Mathlette Rap” and “Beautiful” are all in the digital package.

A first of its kind offer from iTunes and Paramount Films, the idea was conceptualized by Los Angeles marketing firm Buzztone, Inc. with independent digital distributor Artists Without a Label (AWAL).

Buzztone CEO Liz Heller said the idea materialized while her firm was brainstorming ideas for marketing the movie itself.

“We were working with Paramount on some ‘BuzzMarketing’ tactics for the film, and we believed that everyone who will see and love this film would be a heavy online user, the idea to release the soundtrack exclusively as a digital download just developed from there.”

….Raised in the African bush country by her zoologist parents, Cady Heron (Lindsay Lohan) thinks she knows about “survival of the fittest.” But the law of the jungle takes on a whole new meaning when the home-schooled 15-year-old enters public high school for the first time and falls prey to the psychological warfare and unwritten social rules that teenage girls face today. Directed by Mark Waters (“Freaky Friday”), from a screenplay by Emmy winner Tina Fey (“Saturday Night Live”), “Mean Girls” is a fictional comedy based on Rosalind Wiseman’s New York Times bestseller, Queen Bees and Wannabes: Helping Your Daughter Survive Cliques, Gossip, Boyfriends and Other Realities of Adolescence. which Time praised as “a chilling account of the life our girls navigate in their school lunchrooms and hallways.”

Lindsay Lohan is Cady, a bright, well-grounded 15-year-old who is just starting high school. (She has spent the first part of her life in Africa, where she was home-schooled by her zoologist parents — a neat device that makes her a believable naïf in this strange new society, and causes her to wonder if the jungle isn’t actually more civilized.) Cady is sucked in by the allure of the cool group, known as the Plastics: though she claims she’s a spy, joining the clique to subvert it from within, part of her relishes the glamour, excitement and power that being a Plastic offers.

In clambering up the status ladder, she unwittingly suppresses the most genuine, moral and interesting parts of herself. Formerly a star math student, she dumbs herself down, betrays the loyalty of the two misfit students (Daniel Franzese and Lizzy Caplan) who were friendly to her before anybody else was and, worst of all, implicates her well-intentioned math teacher (Tina Fey, who also wrote the movie) in a career-destroying lie. Along with the more serious consequences of these actions, Cady ends up alienating the cute hunk who was originally attracted to her unpretentiousness, but horrified by her subsequent venality.

….the ending of “Mean Girls” is … a kind of ridiculously hopeful utopian fantasy, in which Cady, along with every other female character, ends up being smart and popular and tolerant and friendly to every other student. The turning point comes when Ms. Fey’s math teacher gathers the entire female population of the high school in the gym, excoriates them for their back-stabbing, gossipy behavior and somehow induces them to instantly and collectively renounce their sins.

….what ultimately makes “Mean Girls” so original is the way that, even amid all this niceness, it retains its insolence. Though the movie preaches acceptance, it takes hilarious shots at every species of high school life, from fat kids to earnest jocks to rebellious lesbians to bumbling math teachers to ingratiating parents. And it has one dazzling feature that most morally instructive fables lack: its villainess gets hit by a school bus – for laughs. Watching this movie, teenage girls may pick up on a subtle and complicated idea not usually found in teenage morality tales: being a nice person doesn’t require being saccharine or giving up a measure of mischievous wickedness. [NY Times]