Taking a dive into the Marvel Digital Comics service, is it worth the price of admission?

I need to confess something right of the bat here, I am a 33-year-old father of two, a professional in the telecom industry and I am a huge, HUGE comic book fan. So huge in fact that my oldest son (who is 6) thinks I am the smartest, coolest person alive because I, and I quote, know everything about superheroes. When I was younger I used to collect about six titles a week, when I hit 18 years old I was up to about ten titles a week (all Marvel titles except for some Batman and Superman). I quit when I was about 23 solely due to financial reasons, as a result I missed out on a lot of the new (sometimes horrible) storylines in the past ten years or so, I have no regrets that I missed the whole Ben Reilly clone saga in Spider-Man though. 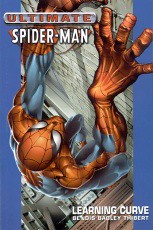 Despite the fact I was not buying new comics my love for comics and the Marvel Universe never faded. I watched every Marvel (and DC) superhero movies (even the really bad ones, ugh Captain America), bought some ultimate graphic novels and I may have seen a scan or two of the Civil War and House of M series. Collecting though is something I never did again, when I stopped comics where approaching three dollars each and the amounts I was buying was really eating into my funds. Fast forward to a few months ago and the announcement of the Marvel Digital Comics Unlimited subscription service. Pay $9.99 per month or $59.88 per year and you have access to thousands of digital comics any time you want, as much as you want, sounds like a dream come true.

I was a member of Marvel.com already and had read a number (all of them) of their online comics when they were called Marvel dot Comics so I was pretty familiar with the systems they had in place. On day one of the launch I signed up for their new service, or rather tried to, see there where some pretty serious launch issues with the service. When I began the signup process it was VERY slow (which is understandable) and there were security errors with their certificates, which had me doubting whether to provide credit card details. Once I finally got to the information page the billing address form was missing some important fields, which once you tried to pay would cause the payment to not be completed because it could not verify your address.

I e-mailed support to try to get this fixed and checked back the next day, oops, site was hacked it seems, after marvel.com it appended the words drstrange automatically over and over until the character limit was reached, making it impossible to get to the page. Unbelievably this was happening for a few days so despite my anticipation I decided to wait a week or so and try again. Sure enough a week later everything was working, no certificate, signup or web page errors, I completed the process payed for a year and dug in. 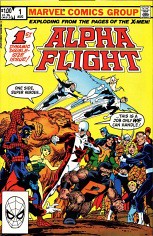 Right off the bat I beelined for one of my favorite alt series, Alpha Flight, that was when I discovered the first major limitation of the service; not every comic is here. Even though Alpha Flight was listed in the series list, all they had available so far was the first issue. It takes some time to scan and process these comics, I suppose, so they are adding new comics daily and we simply need to be patient. I did notice that the 2004 one year run of a new Alpha Flight series was entirely available so I used that series as my test of the system (it was quite bad, art was great but the storyline…eesh!). They have made it pretty easy to find a comic, you can choose to search by series, character, comic creator (if you like Stan Lee, or McFarlane, etc..), favorites (predetermined lists of titles) or newest comics added to the database. Series is my way to go, I am going through all the As right now, but I deviated to some of my favorites a few times. Once you open the series or list of comics you want you simply click the Open link and the flash based viewer launches in a separate window.

The viewer is pretty good, works in IE/Opera/Firefox and is basically the same one (if evolved) that they have been using for years with their dot comics website. There are a number of view options here, you can either view a single page on your screen, two pages on your screen or use the smart panels view mode. Single page is a decent viewpoint, but some text heavy pages are hard on the eyes on smaller displays, two page mode is perfect on a larger display, 19 viewable inches or greater, the best mode though is smart panels. When you choose smart panels every click brings each individual panel to maximum size possible and gives you a great view of the art and dialogue, on my main computer, a laptop, this is a great system as my display is relatively small at 15 inches.

The system generally works great; there are very rare occurrences when the panels do not move to a perfectly viewable spot, but that is about the only issue. They also included some transition plugins, smooth or jump for when you click, either one works, jump is the best way to go for maximum efficiency though. Changes pages are performed with clicks or by using the navigation bars, you can also go to the next comic in the series with a simple click when you are done the current issue. All in all the viewer is functional and efficient and gives you many different ways to view your comics in the best possible manner. They are offering free preview issues so you can go to their site and check out the viewer and the quality yourself without committing. 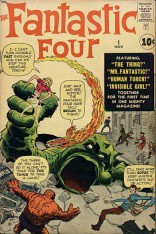 From a visual perspective Marvel is being VERY careful with the scans of their titles and obviously has the original source material to work from. From Fantastic Four #1 to the newest additions the comics look great and are vibrant, bright and easy to read. The ability to view these titles on large high quality displays really makes you appreciate the amazing designs of the earlier runs, the breathtaking visuals of some of the hottest artists and unfortunately really notice a badly drawn or inked comic.

Once my initial euphoria faded on seeing all of these comics in digital form I began to notice something…odd. For some strange reason many of the series are being digitized out of order. I understand that having all the titles right away is impossible, it is a long process, but why do we have Ultimate Spider-Man #'s 1, 2, 3, 7, 14, 15, 19 and so on? Would it not make more sense to start from the beginning and scan in order? If I was new to a series and saw there were 32 issues of Ultimate Spider-Man in the system I would be and was quite ticked to see it is not consecutive issues, to make matters worse at times they stop in the middle of a storyline and continue many issues later leaving a new reader in the dark until they scan more issues. There is a great deal of content, I would just prefer to see them move to consecutive scans and concentrate on the flagship series. There is also going to be at least a 6 month lag on new titles, so if you want to read the new series as they happen you will need to buy a print copy.

Overall Marvel Digital Comics Unlimited is a great service and well worth the subscription price, they are already promising a banner year in 2008 for the new service and at least 5-10 new scans every week day, so we will see all the issues we want eventually. Despite my gripes there is a ton of content available already and the viewer and comic quality is quite good. If you could give a rating to a service like this I would give it three and a half stars out of five with the potential to be one of the best things for comic book fans since, well since comic books were invented.