But it's not the only thing new for them.

[ADBLOCKHERE]Korn has released a video of their new single “Coming Undone.” The song is from See You On The Other Side their first album on the EMI/Virgin label. A previous single from the album, “Twisted Transistor” was a top ten hit. Aside from the new CD, new single, and new video; Korn has launched a world tour.

Speaking of all the changes the band has been through lead vocalist Jonathan Davis said,


“When we listen to what we’re doing and look at each other with scared, fucked up feelings in our guts, that’s when we know we wrote something special. That’s how we know we’re breaking down the boundaries and doing some new shit, because we’re scared about it.”

Not only did the band begin their new venture with Virgin EMI, but they lost former guitarist Brian Welch. Davis retained control as the main producer on this CD, but added The Matrix and Atticus Ross, forming a production team to take them onward and upward.

Anyone familiar with Korn’s sound knows they are anything but stagnant. The group practically carved the way for the harder sound that many bands have adopted today. This release is no exception, going further into uncharted territory mixing heavy metal with a twisted type of funk.
Below are links to streaming versions of the video as well as concert dates. 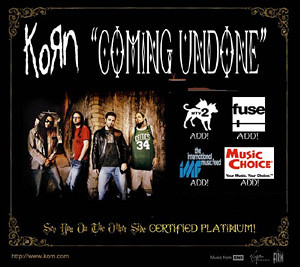