Perhaps it should have been the Beatles in an “Octopus’s Garden,” or Spongebob Squarepants and the Bikini Bottom Marching Band to hold the record for the deepest underwater concert, but we will have to settle for intrepid young U.K. star Katie Melua as the reigning maestro of the deep.

Mellow singer-songwriter Melua and her stalwart band of five performed a concert Monday for workers 303 meters (over 900 feet) below sea level at the bottom of a support leg of the enormous Statoil Troll A gas platform in the North Sea. 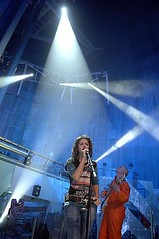 Melua, 22, not dissimilar in style to American Norah Jones and currently the U.K.’s top-selling female artist, and band underwent rigorous physical testing and training — including instruction on how to wriggle through the window of a helicopter submerged in frigid waters — before they were choppered to the rig and lowered via elevator to the dusky deep for the fathomy show. 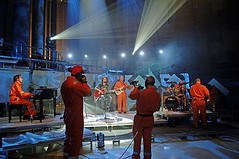 “This was definitely the most surreal gig I’ve ever done,” quipped the Georgian-Irish performer during the performance. The stunt was the brainchild of platform manager Jan Hauge in celebration of the 10-year anniversary of gas production on the Norwegian Troll A rig. Hauge also joined Melua’s band on electric piano for one of her tunes, so perhaps he had an ulterior motive for the suggestion.

The Troll A platform — at 1,548-feet, the tallest installation ever moved by humans — was towed into position about 55 miles from Bergen, Norway, in 1995. The platform, most of which is underwater, is supported by four legs, one of which served as Melua’s concert stage. Twenty-two tons of lighting and sound equipment had to be transported to the bottom of the leg in preparation for the record-breaking performance.

In addition to the gassy staff, the audience included Craig Glenday, Editor-in Chief of Guinness World Records, who verified the validity of the world record, including that Melua performed a “traditional concert performance of vocals and instrument to an audience.”

Norwegian Broadcasting Corporation (NRK) will show a TV program of the “traditional concert performance of vocals and instrument to an audience” on Saturday, and a documentary of the entire experience “around Christmas.”