Three of the jurors who found Michael Jackson not guilty on all charges brought against him in a dramatic June 13 verdict have now stated they believe the erstwhile King of Pop molested Gavin Arviso, his accuser in the case. Two of the jurors reportedly have book deals and a joint TV movie in development, leading, not unreasonably, Jackson’s defense attorney Thomas Mesereau Jr., among others, to question their motives. 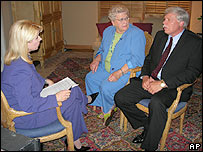 Eleanor Cook, 79, and Ray Hultman, 62, said Monday on MSNBC’s new Rita Cosby: Live and Direct show that they believed Arviso was sexually assaulted. “No doubt in my mind whatsoever, that boy was molested, and I also think he enjoyed to some degree being Michael Jackson’s toy,” Cook said. She added, “I’m speaking out now because I believe it’s never too late to tell the truth.”

“There were a lot of people that were interested in this case from day one,” Hultman said. “People expect to know what’s going on with their justice system and how things work.”

But why now and not then?

Cook and Hultman said they agreed to go along with the other jurors when it became apparent that they would never convict the pop star. Cook said she and Hultman caved to threats from jury foreman Paul Rodriguez. “He said if I could not change my mind or go with the group, or be more understanding, that he would have to notify the bailiff, the bailiff would notify the judge, and the judge would have me removed,” she said.

So now you’re uncaving – doing a bit of reverse spelunking?

Cosby asked Cook if the other jurors will be angry with her. “They can be as angry as they want to. They ought to be ashamed. They’re the ones that let a pedophile go,” she responded.

Hultman indicated he was upset with the way other jurors approached the case. “The thing that really got me the most was the fact that people just wouldn’t take those blinders off long enough to really look at all the evidence that was there.”

Hultman is writing a book about the case called The Deliberator, although it sounds to me that he allowed others to deliberate for him. Cook’s forthcoming tome bears a more lurid title, Guilty as Sin, Free as a Bird.

Attorney Mesereau told AP it was “time to move on” from the case. “Twelve people deliberated and out of that process justice is supposed to result. Now, two months later, these jurors are changing their tunes. They clearly like being on TV. I’m very suspicious … The bottom line is it makes no difference what they’re saying,” he said.

No legal difference, anyway, the case cannot be appealed.

Then joining a small but growing bandwagon, a third juror, Katarina Carls, appeared on the Cosby show Tuesday night and said she initially agreed with Cook and Hultman that Jackson was guilty, but decided she could not convict because there was reasonable doubt. “I kept asking myself, is there any slight possibility that this boy might lie at all? And my answer was yes,” she said.

A fourth juror, Mike Stevens, also appeared on the show last night and disputed Cook’s claims that she felt threatened to acquit. “What I heard why that was said was because she kept making remarks … involving her own opinion and the way her heart felt,” Stevens said. “You’re supposed to follow what the law says and what the evidence shows, not what your heart feels. Am I right?”

“She said, ‘Honey, I’m 79 years old. I can do whatever I want to do.’ And so how can she say that she felt threatened when she came up with a comment like that?”

What she said and what she felt weren’t necessarily the same thing, but a verdict in a criminal trial is supposed to be unanimous: if it wasn’t then the dissenters should have stuck to their guns. That they didn’t is a failure for which they shouldn’t be rewarded now.

More on the no-longer-unanimous jury here and here.

'Let's Not Talk Anymore' by Weng Pixin stands out as a work of art as well as stories with masterful characterizations.