He was a poet who was not afraid to split his ribs to show us his beating heart: that deserves to be honoured.

A number of years ago a friend of mine who was attending McGill University in Montreal, Canada, was describing an encounter she had had with Irving Layton. He was currently serving as writer-in-residence, and as she was a poet, she had arranged to meet with him to discuss her work.

As befits his rather philandering reputation, the only thing I can remember from our conversation was that she made sure to keep a desk between them at all times. We both laughed at that, but I’m also certain that she was also only partially joking. Mr. Layton’s reputation as a ladies man had always been well deserved.

Irving Layton died yesterday at the age of 93. Since 1994 the ravages of Alzheimer’s disease had decimated the brilliant mind of one of Canada’s first international literary stars. His nomination for the Nobel Prize in literature in 1981 bore out the significance of his contributions both at home and abroad as a poet. 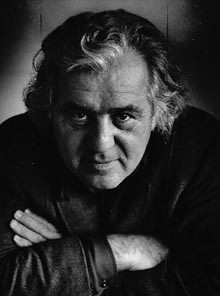 But for a lot of people it will be his larger than life persona that they will remember. Even his most famous student, Leonard Cohen, is quoted in The Globe And Mail’s obituary as saying: “I taught him how to dress, he taught me how to live forever.”

Like a lot of Montreal’s Jewish community of his generation, he was raised on the now infamous St. Urbain Street. Born Israel Lazarovitch in 1912, his family emigrated from Romania when he was one year old. As a French-speaking city, Montreal was attractive to Romanian Jews because of that language’s similarity to Romanian. (That was the primary reason my Mother’s family settled there when they came to Canada in the late 1800s.)

Mr. Layton started to gain notoriety when he was in University in the 1930s for his socialist politics and writings, both of which would see him blacklisted from entering the United States for nearly fifteen years. It was in the 1940s that he first started to make his presence felt on the Canadian literary scene.

Along with a few other poets he pushed for a style of poetry that was independent of the prevailing Victorian style favoured by poets of previous eras. They argued that poetry should be allowed to develop its own style reflective of the day’s social realities. This helped to set the stage for poets like Leonard Cohen who would begin writing in the late fifties and early sixties.

He revelled in his role as the rebel and the iconoclast. The more people would react to his antics, the more he would say things guaranteed to feed their ire. In 1972 he was quoted as saying: “I am a genius who has written poems that will survive with the best of Shakespeare, Wordsworth and Keats.”

While I’m sure that Mr. Layton’s attitudes and behaviour must have appeared bombastic and egotistic to the establishment of his time, and perhaps ridiculous to people of our generation, he wouldn’t have gotten very far without it. In the worlds of academia and literature of the 1930s and 40s he was the quintessential outsider.

In Montreal, and indeed Eastern Canada, those worlds were the preserve of the Anglo-Saxon elite. The majority would have come from moneyed backgrounds and from within a close knit circle of patrician families. For a product of the rough and tumble world of the mean streets of Montreal’s Jewish ghetto it would have been extremely difficult to be accepted as an equal in that society.

In order to succeed Mr. Layton would have had to develop the skin and the temperament of a rhinoceros. The embracing of the role of iconoclast and egotist would have been his only recourse at the time. It was also essential to the development of Canadian literature.

No one but an outsider would have dared challenge the status quo in the manner that Mr. Layton did: they would have had too much to lose. He was already on the outside looking in so what did he care if they continued to shun him. But such was the power of his voice his work could not be ignored, either by publishers or the establishment.

For those of us who only knew of him in the modern era, we only saw the bombast and the womanizing. His position, which we could take for granted as being won on merit, to him might have still appeared tenuous and in need of defending. Sometimes the hardest part of fighting the types of battles he fought is accepting that you’ve won. You are continually waiting for, and guarding against, attempts at counter-attack.

As a Jew of his generation and background, it would have been an especially difficult feeling to overcome. His parents would have carried memories of the wandering Jews of Europe, forced to move from country to country as laws changed. He grew up in Montreal, where on one hand were the Anglo-Saxon elite and on the other, the Roman Catholic majority: neither of whom could be said to be overly fond of Jews at the time.

When his childhood and early manhood of living in those conditions was followed by the horrors of the Holocaust his continuing to play the role of the outsider long after it was necessary becomes understandable. At the same time one must take into consideration how far into his cheek his tongue may have been lodged when he was issuing quotes to the media.

I’m sure he got a great deal of pleasure out of playing the rapscallion for the stolid Canadian Press of the sixties and seventies. It allowed him the freedom to say things like: “In Pierre Trudeau Canada finally has a leader who is worthy of assassination…” and not be interned by the police.

What’s truly most important to remember about Mr. Layton is that first and foremost he was a poet of the highest quality. In trying to offer an explanation for his character, it is my hope to turn your focus to his work where it belongs. He published more than forty books of poetry and prose during his lifetime, radically changed the face of Canadian poetry, and carved out an international reputation.

Aside from his previously-mentioned nomination for the Nobel Prize for literature, he was also awarded the Governor General’s award for poetry in 1959, and called to the Order of Canada in the early seventies.

The Governor General’s award was the first sign that his work was gaining acceptance by the Canadian literary establishment; or a sign of how much the times had changed since he had begun writing. Whatever the reason, it was still a huge accomplishment for a kid from St. Urbain Street.

Unlike some of his more bloodless contemporaries, Layton’s poetry was filled with the passion and fire that marked his life. For those who had tired of the cool precession that had marked the Victorian school of poetry previously practised in Canada, his provocative and emotional offerings must have seemed like a breath of fresh air.

Recently Mr. Layton’s work has come under fire for his purported misogynist attitudes. He was never successful in marriage, and wrote freely and emotionally about all his relationships. His sensibilities towards women are not that of a North American man; he is open and frank in his admiration and quick in condemnation.

Taken in isolation from the rest of his character, a case can be made that he disliked women, but put the poems into the context of the man. He treated all subject matter in the same manner. Whether he was talking about a woman or a street corner he would speak from his heart without editing. They can be mean, they can be ugly, but his poems were always the truth of that moment he was trying to express.

Unfortunately trying to find links to any of Layton’s work published on the web has proved to be impossible, so you will have to settle for either purchasing one of his books or going to your local library and checking one out in order to sample his wares. I would encourage you to do just that before reading any further analysis of his work.

Read him and appreciate, or hate, as your feelings dictate. Don’t let the hoopla surrounding his character and his infamy be what he is remembered for. He was a poet who was not afraid to split his ribs to show us his beating heart: that deserves to be honoured.