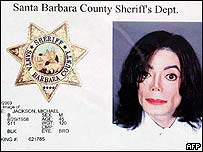 The singer claimed his shoulder was dislocated and his wrists and back hurt during his arrest on 19 November 2003.

Santa Barbara Sheriff Jim Anderson said an inquiry by the California Attorney General and the Bureau of Investigation had found Mr Jackson was not injured.

….Mr Anderson said the official investigation had shown Mr Jackson was treated in a “in a professional manner”.

“After interviewing 163 witnesses and expending an excess of 2,500 investigative hours, the California Bureau of Investigation determined that Mr Jackson was not injured at the hands of Santa Barbara Sheriffs Department personnel,” he said.

“The investigation also concluded there was no criminal conduct on the part of Sheriff’s Department personnel during their contact with Mr Jackson.”

The sheriff declined to say whether they would bring criminal charges against Mr Jackson for making the allegations.

The singer made the claims of mistreatment during a television interview on CBS in December.

He said: “They manhandled me very roughly, my shoulder is dislocated literally, it is hurting very badly.” [BBC]