I only hope that I’ve managed to string enough coherent words together through the haze of Nyquil to inspire...

A few weeks ago a friend of mine suggested that I give a band a listen, to see if I might be interested in interviewing them for the Band of the Week feature. Of course, music junkie that I am, my answer was yes. The band? Their name is Inverse Order, and they're a group hailing from Auckland, New Zealand.

The first thing I did was check out the link that she sent me, which was their MySpace space. As a first step in getting to know a band, myspace has proven to be remarkable. Within a few minutes I knew without a doubt that this was definitely a band that I’d love to get to know better. Also, I was hoping to be able to weasel a few more songs out of the band than the four they had posted on their site. As remarkable as they were, surely there were more… and I wanted them! 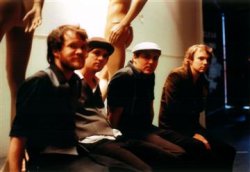 In the hopes of keeping honest, by the way, the link was really the second thing I did. The first was to say “Oh Cool! New Zealand!” to myself once I found out where they were from.

The next thing I did, after the link (I promise) was to email the band and see if it would be possible to talk to them about themselves and their music. No effort was made to beg new music off of them I’ll have you know… that was in the second email.

Ever gracious, James (Bass player and email contact extraordinaire) told me that, while the band was busy, I could send them my questions and that he would see to it that the guys in the band would take time to answer them.

Told you he was gracious.

Here then, is the cobbled together transcript of those questions and their answers. If it helps, please feel free to read my questions in a slightly muffled voice, as I have a cold…

Who are the members of Inverse Order and what part of the overall sound do they contribute to?

I’d like to ask about the name of the band, next. Where did "Inverse Order" come from? Does it come from anything in particular or is it just something that sounded cool so everyone ran with it?

Tom: When Neill and myself first started courting, Neill had made a band logo that was

the Greek symbol for Phi, which basically looks like an 'I' and an 'O' on top of each other. I thought it looked cool, and whilst doing inverse sin functions in high school calculus I decided to use 'I' and 'O' together and Inverse Order was what came out of it.

I think we kept it because there are deep connotations – i.e. – Inverse Order = doing things backwards, chaos etc.

For those of us not familiar with the band, how did Inverse Order come to be? Did you always know each other?

James: We're quite an Internet band, so most of our conversations take place over email. It’s also interesting to note that our old drummer — Tristan and James all went to the same school — and our old drummer bought his drum kit off of Tristan. And I believe that we were all at the first ever Inverse Order show, just in different bands.

I've had a chance to listen to a number of your songs now, and I'm curious as to how you've come to end up with them. Is there anyone in particular that handles the lyrics, for instance, or is it a collaborative effort. Are the lyrics the first thing to emerge, even?

Neill: For the most part lyrics emerge post music, whether it is fleshed out as a band or in a bedroom. Usually they are derived from scratch vocals over the instruments to form melodies, which I then reform in some sort of coherency once I come to terms with what is coming out my mouth and subsequently, what it means.

Either together as a band or simply in your individual lives, can you remember the first time you managed to come up with an original song? What did that feel like? To know that you'd created something that nobody else had?

Neill: Individually I think I was about 15, figuring out how to form riffs and combine them into something. Wound up with a very riff heavy piece called Disarray, completely vocal-less. First vocal song was a Tool-esque song by the name of "Letting It Go", which became an early Inverse Order live song.

Tom: I was 12 and it was called "Just Me". It was a mixture of "Sad but True" by Metallica and "It's On" by Korn. I imagine we'll play it in Inverse Order one day.

What was the first song written by Inverse Order? Is it one that's currently up on your myspace page (or perhaps waiting to be featured on an upcoming album/ep) or is it something that's been left back in the band's past?

Neill: All the very first songs we played were bought into the fold by me as four track bedroom demos. I think the first one we got together properly was a piece called “Fun Free”, which we haven't played live since about 2004.

Speaking of firsts, I'm curious as to the first song that everyone played? Was it an original? Was it a cover?

Neill: Originally (2003) I think it may have been My Own Summer (Deftones)? With James I have no idea. With Tristan I also have no idea but possibly some Incubus song because he seemed to know a few.

James: For me it was probably “Mary had a little lamb” on the trumpet. I bought a trumpet to join the school orchestra, and by the time we got home I’d figured it out.
On the bass it was the song by the Propellorheads in The Matrix – you know the scene where Neo and Trinity walk into the lobby of the building with about a million guns and blow the place to bits. That song.

Tristan: at the very first practice I ever went to, I believe I learnt three inverse order songs for the occasion, but I have vague memories of us thrashing out Incubus, Foo Fighters and probably Deftones. But personally, the first song I EVER learnt to play on drums was Coolio's “Gangstas Paradise”. Drum teacher's pick. Pretty much rock beat 101.

How long was it until the idea came around to take one of your songs and see if you could get some studio time and actually record it? What song did everyone chose to be the first?

Neill: We got some free studio with an amateur in late '03 and laid down three tracks, all which have long since been forgotten. The first proper single, "Good Mourning Lullaby", was recorded in early '05 over a couple of days in a tiny studio hidden in an Auckland office building. It seemed to be our most commercial song at the time so it was a fairly easy choice.

How was working in a studio? And, dare I ask it, for those curious about perhaps taking their own dreams and one day finding themselves in a professional studio, about how much did that first trip to the studio cost?

Neill: Depending on which you consider first, both were free, the second because we won the time in a local band comp – good way to go if you don't have any expectations!

Tristan: it really depends on how good you want it to sound… personal experiences though – cheapest song to record: $600. Most expensive: $5000.

What was the next step after the studio? After reading your bio on your myspace page I noticed that you seem to have achieved a fair amount of radio play for your two singles, "Good Mourning Lullaby" and the newer song, "Hope For Us All?" Was it difficult to get yourself noticed by the media?

Neill: Yes and no. We have a fairly good relationship with a few radio stations and promotional agencies, which we've built from back when we released "GML". Suffice to say "Hope" was a much easier release because we knew who to talk to get things done.

Neill: We're in a bit of strange place right now in that we're moving progressively away from what’s on myspace with the exception of "Hope". We're hitting the studio in December to record a five to six track EP that we hope to have out early next year. Point is, most of what we're playing right now is not available in any way, shape or form to we are really relying on the strength of the music to hook people from a first listen live. Having people come up to us after a show commenting on particular songs seems to reinforce this is actually working!

And on that note (or typed-in answer, as it were) we shook electronic hands and parted for the moment.

I only hope that I’ve managed to string enough coherent words together through the haze of Nyquil to inspire even a handful of people to head on out to their myspace page and check them out. Should I accomplish that, you see, their music will do the rest and have those people telling their friends to check it out, and so on and so on…