Having Rocked the Vote, Greene Steps Down 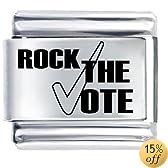 Despite unprecedented success in getting out the vote among young people — Rock the Vote registered 1.4 million new voters for the 2004 presidential election and helped propel 21 million young voters to the polls last November 2nd — and the organization’s ostensible nonpartisan perspective, a quick survey of its “action items”, blog, and mission statement makes it clear its leaders lean toward “progressive” causes and that they would not have been unhapppy had the Democratic party prevailed at the national level last November, which it most assuredly did not.

So despite RTV’s success at getting out the vote, the 15 year-old non-profit organization failed rather miserably at achieving its political goals — although social security “reform” does seem to be seriously stalled — and it is therefore no surpise that RTV president Jehmu Greene is stepping down to “pursue new avenues in media, politics and business.”

“For the last five years I’ve had the honor and privilege to help restore Rock the Vote as the nation’s leading political organization for young people and revive our branding, visibility and credibility with this generation,” she said in a statement. “The relationships I have forged and the lessons I have learned have been invaluable, but sadly for me the time has come to chart a new course.”

During her tenure, the organization’s membership grew from 1,500 to 1 million and the successful street team program was launched.

“My fight for seeking positive change and building political power does not end with this move,” she said. “We are between the biannual election and budgetary cycles, and this is a convenient time for RTV to effect this transition. I am excited to seek other challenges and new opportunities. I thank our dedicated board members, staff, street team members and RTV’ers everywhere for the opportunity and the honor to serve with them.”

Greene was born in Washington, D.C., and grew up in Austin, Texas, the daughter of Liberian political exiles. Prior to joining Rock the Vote, she was the director of women’s outreach and Southern political director at the Democratic National Committee (DNC). She was executive director of the Texas Young Democrats and worked on the campaigns of Clinton/Gore ’96, Harvey Gantt for U.S. Senate, Lloyd Doggett for Congress, Jim Mattox for U.S. Senate and Ann Richards for Governor.

I’ll never give up writing and editing, but I would like to pursue some documentary projects and possibly create a radio show or some other way to reach larger audiences.