Author J.K. Rowling refuses to part with her fictional progeny.

Exhibiting fiercely maternal instincts over her seventh fictional progeny, Harry Potter author J.K. Rowling revealed on her website yesterday that airport security in New York tried to pry in-progress Book Seven manuscript from her protective clutches as she boarded a plane back to the U.K. last month. She made it clear, however, that stowing her baby was a no-go.

"The heightened security restrictions on the airlines in August made the journey back from New York interesting," she wrote. "As I refused to be parted from the manuscript of book seven (a large part of it is handwritten, and there was no copy of anything I had done while in the US). They let me take it on, thankfully, bound up in elastic bands. I don't know what I would have done if they hadn't; sailed home, probably." 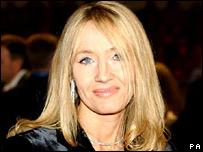 The bookish blonde billionaire had participated in a charitable book reading at Radio City Music Hall August 1 and 2 with fellow authors Stephen King and John Irving. Security regarding carryon luggage was drastically tightened after August 10 when British police intercepted a terrorist plot to blow up U.S.-bound airliners.

Rowling, 41, addressed the reading in another site message. "My readings in New York with Stephen King and John Irving were so much fun. It's not often that I do something like that and wish I could do it all over again, but I would have happily done a third night. If you were there, and yelling, thank you: the crowds, both nights, could not have been more wonderful," she enthused.

"I did mess up one answer, though," Rowling continued. "I was asked, 'what question have you never been asked that you ought to have been asked?' … and my mind went blank," she admitted. "It occurred to me almost as soon as I got off stage that there IS a question I've always been surprised nobody's put to me … I can't make amends to the girl who asked, but it is in tribute to her that I give the answer, belatedly, under 'Miscellaneous', Extras section."

These British writers… the game is afoot and whatnot. Upon jogging over to the aforementioned coordinates, one finds this new entry under "NAS (not answered question)": "Why did Dumbledore have James' invisibility cloak at the time of James' death, given that Dumbledore could make himself invisible without a cloak?"

Hmm, good point. Rowling doesn't give the answer, but she does say, "There IS a significant – even crucial – answer"; meaning, I assume, it will will be addressed in the still-unnamed book seven.

She mentioned the title quest too. "I am currently trying to decide between two possible titles. I was quite happy with one of them until the other one struck me while I was taking a shower in New York. They would both be appropriate, so I think I'll have to wait until I'm further into the book to decide which one works best."

Rowling likes to say much and reveal little, it appears; though she did pull down the veil a bit on her emotional state. "I'm continuing to work hard on the book. I've done quite a lot, and I'm really enjoying it, though every now and then I look up and realise that it's THE LAST ONE," she almost audibly sighed.

"You might think I'd have got used to that idea during the sixteen years I've been planning seven books, but it still keeps hitting me… no more Harry after this… and then I bury myself in book seven again and tell myself I've still got plenty to write."

If she does kill off Harry, I will take it as a personal affront. Back in June, the author said, "The final chapter is hidden away, although it's now changed very slightly. One character got a reprieve, but I have to say two die that I didn't intend to die."

Filming is currently under way on the fifth film in the Potter series, Harry Potter and the Order of the Phoenix.