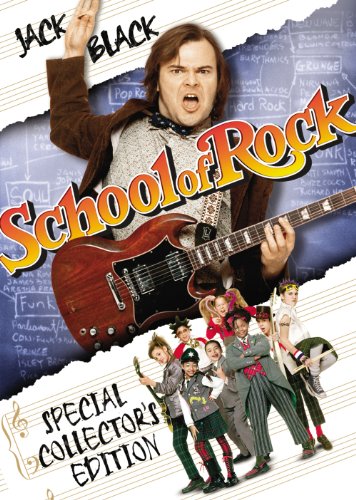 Sometimes the most preposterous set-ups yield emotional truth, and that applies here: Black is a veteran never-was rocker booted from his pretentious band as a general embarrassment, desperately in need of cash to pay the rent, who intercepts an emergency call from a prestigious prep school intended for his substitute teacher roommate.

You can telegraph the plot line out yourself: anarchistic rock dude substitute teaches at stuffy prep school, disrupts system, ingratiates himself with some via sheer brio, antagonizes others, teaches kids to loosen the hell up and rock out, learns responsibility, gets caught, positive attributes outweigh sins, all are better for the culture clash.

A hungover, corpulent career rocker who can’t get his shirt to stay tucked – unburdened by the slightest hint of training and bearing stolen credentials – walks into the snootiest prep school in the state and is handed a class of 10 year-olds to do with as he pleases without so much as being ID’d or observed in the classroom by anyone from the administration? This happens about once in a … NEVER.

Among other glaring holes in the script are the “soundproofing” of the classroom with a couple of pillows and a seat cushion that wouldn’t suppress the sound of a particularly robust fart, let alone a full-on rock band with amped electric guitars, bass, pounding drums, keyboards, four singers, two turtledoves and a partridge in a pear tree.

In real life the din would have alarmed dogs a mile away and drawn every single occupant of the building to their door within the first five minutes.

A roomful of 10 year-olds could have kept the secret that their sub was ignoring the regular curriculum in favor of teaching them rock band essentials (and adjunct roles like sound and lights, security, management) from their parents, brothers, sisters, other students, other teachers, the administration, the rest of the world, for three full weeks in a universe where 10 year-olds don’t have mouths.

The music he teaches them is a rather narrow version of classic rock that is stuck in about 1977 and not a single kid in the multi-ethnic class objects. The tastes of most 10 year-olds might still be pretty malleable, but they also have been watching TV and listening to the radio for most of their lives and would have had some suggestions about what the smelly old teacher could do with his dinosaur music.

But none of this matters much as Black ebulliently powers through a role for which he was born, his manic energy reminiscent of a less spastic, moderately musically talented, more centered Robin Williams; and his philosophy of rock ‘n’ roll as a means to “stick it to the man” has both a certain logic and a charming atavism: when’s the last time you heard someone call the police “the fuzz”?

The kids are energetic and appealing themselves, Joan Cusack is convincing and entertaining as a principal torn between professional persona and her personality, and by the end of the movie, the band really does rock. The story resolution is much more realistic than anything that comes before it, in a sense acknowledging the implausibility of the plot and winking at it.

If you are a Jack Black fan, this is THE movie for you; if not, you may well be one by the end of this flick.

DVD extras include commentary by Black, Linklater and the kids, “Lessons Learned,” Jack Black’s hilarious and committed pitch to Led Zeppelin requesting use one of their songs in the film, music video, MTV’s diary of Jack Black, Dewey Finn’s [Black’s character] History of Rock Interactive Feature, trailers, and more. Rock on.