From where I stand, this film certainly should have been better.

What can one say about a film that has an interesting premise, carries it out poorly, and finally completely abandons it?  It is disappointing to be sure, but how much credit should be given for having the good idea?  Is director Pete Travis's Vantage Point worth watching for the kernel of the idea or should it be abandoned due to its poor execution?

On the positive side, the film features an outstanding cast, including:  Dennis Quaid, Matthew Fox, Forest Whitaker, Sigourney Weaver, and William Hurt.  However, even the cast, and a truly swell car cash in the final minutes of the film, cannot save this mess of a thriller.

The basic plot follows an assassination attempt on the President of the United States (Hurt) during a counter-terrorism conference in Salamanca, Spain.  The viewer is shown the events leading up to and following the assassination from multiple individuals' (both involved and not) points of view.  Or, at least, that's what it's supposed to be.  After showing the events from several, points of view ranging from interesting, to outlandish, to boring, the film completely abandons that narrative structure to reveal the even more silly "reality" of the situation.

At the center of everything in the film is Secret Service Agent Thomas Barnes (Quaid), who is back on the Presidential detail after taking a bullet while pre 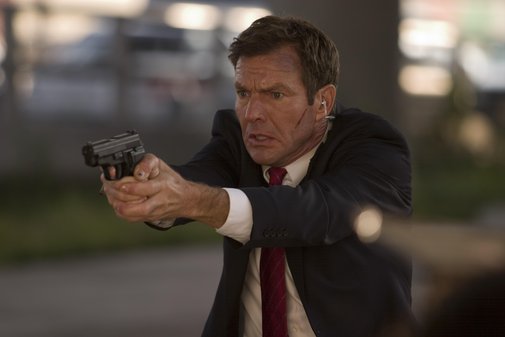 venting an assassination attempt six months previously.  It is Barnes who ends up tracking down the culprits and, as much as anyone, cracking the case.  In actuality though, much of what Barnes accomplishes he does through sheer luck.

Along the way, Barnes is aided by Howard Lewis (Whitaker), an American who happens to be at the event with his HD video camera and news producer Rex Brooks (Weaver) and her team.  It is through watching the various videos these people have that Barnes is able to spot problems and culprits (not that the viewer gets shown the salient points until well later in the film).  The various video angles that Barnes has access to so rapidly that just happen to have filmed the right thing at the right moment seem a tad too fortuitous, but the fact that Barnes can't spot one the main culprits without them, ridiculous (and the other bad guys just kind of fall into his lap).

The idea of the film, different people having different perspectives on the same event, while in no way original, is still a good one.  In the first 10 or 15 minutes, Vantage Point sucks the viewer in and creates a great deal of tension.  The first quarter of the 90 minute film is well executed, the varying 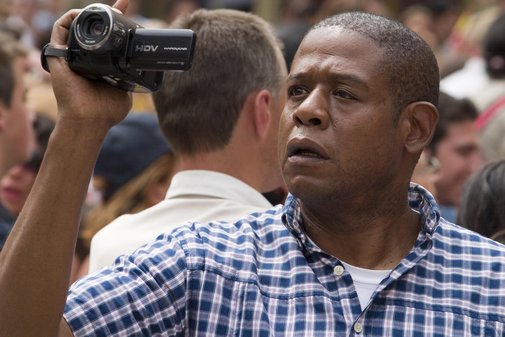 perspectives, while making it clear who Barnes should be targeting even if he doesn't know it, still lead the viewer to want to know what happened.  However, as the film progresses watching the events at the conference unfold becomes terribly, excruciatingly boring.  At some point, the story enters the ridiculous, with motives being dismissed almost entirely, and foolish plot "twists" taking place.  While that is disappointing, it is nothing compared to the disappointment the viewer will feel when the narrative completely abandons, without reason, the multiple perspective take, opting for a straight action movie attitude instead.

It may be that switching to straight action mode was the only way the film could wrap up the wisps of a plot it contained.  The straight action switch is almost salvaged by a fun car chase, but everything is once again dashed to pieces with the absolutely silly reason that the terrorists fail.

Vantage Point is one of those films that one watches and just can't help but feel that it could have been better, that is should have been better.  One gets the feeling that Barry Levy, in writing the script, spent far more time figuring out what differ 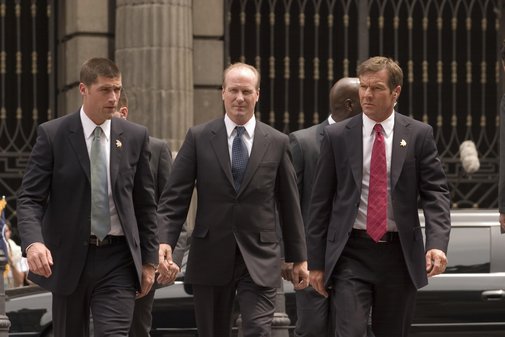 ent perspectives he could use than working out the whys and wherefores of the assassination attempt itself.

Vantage Point has been released to DVD in multiple versions – a single-disc standard format DVD, a two-disc special edition, and a blu-ray version.  The single-disc version contains a couple of behind-the-scenes featurettes; a director's commentary track; and a silly little, pretend outtake from the film.

There are good moments and aspects to Vantage Point, unfortunately, they end up buried a format that doesn't work and that is used in lieu of a well thought out and developed plot.