To celebrate the 75th anniversary of the detective, the animated series is released on DVD, but does Madonna make an appearance?

The Dick Tracy Show: The Complete Animated Crime Series provides hours and hours of enjoyment for children, and in short spurts can be moderately amusing for adults as well.  This boxed set is meant to celebrate the 75th anniversary of Dick Tracy.  This particular Tracy series originally aired in the early 1960s, and all the episodes are short, about 4 and a half minutes in duration.

The most distressing thing about the series, and one of the reasons it won’t necessarily work as well for adults as it will for children, is that Dick Tracy himself plays a miniscule role.  Each episode starts off with Tracy ending a call with the Chief and then farming out the case to one of his men.  From time to time, Tracy himself will arrive at the scene, but usually only with the paddy wagon or another vehicle to help escort the cro 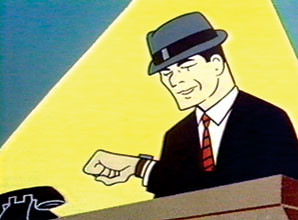 oks off to jail.  There are times when he does slightly more than this, but only slightly.

Tracy’s helpers include the stereotypes Joe Jitsu and GoGo Gomez.  While today these characters are certainly offensive, there is a question as to whether or not leeway should be granted to the show as it was made over 40 years ago.  The debate is quite long on both sides of the argument and not one I will enter into here (both sides do make good points).  It is just something to be aware of should you be sitting your child down to watch; it’s a call for the parent to make.

Tracy’s other helpers are Heap O’Calorie (an overweight, bumbling detective) and Hemlock Holmes (a dog that sounds an awful lot like Cary Grant, though Grant does not provide the voice).  On the whole, all of Tracy’s helpers are at turns funny, annoying, cute, and grating.

The villains are some of the classic Dick Tracy villains: Mumbles, Itchy, Flattop, 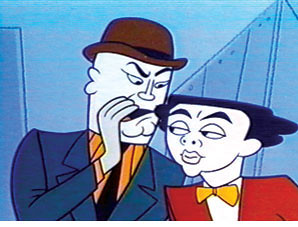 Pruneface, etc. (alas, though, the series was made before Madonna's time and she is not here to voice Breathless Mahoney).  Beside the brief, throw away moments Tracy appears in the episodes, these guys are really the only reasons this series can be placed within the Dick Tracy universe.

As they are all such short episodes, they follow a very standard plot.  As mentioned above, Tracy finishes up a call from the chief and calls in one of his employees.  His chosen helper for the episode goes off and tries to capture the bad guy (or, more often, pair of bad guys), gets into trouble, some sort of slapstick ensues, they check in with Tracy via their wrist radio, and, through some odd turn of events, capture the bad guy.

Though formulaic, it absolutely works.  After all, it must be remembered that cops and robbers television shows and films always follow roughly the same formula.  There are slight changes substituting action for jokes or vice versa, depending on the leaning of the script.

The four disc DVD set comes with a Dick Tracy comic, giving a couple of early adventures in the famous detective’s career.  Outside of that, there are really no special features to the set.  However, as the series as a whole is geared far more toward children than adults, strictly speaking, none are necessary.

In the end, the series should prove amusing to younger children, provided that parents are okay with the cartoony violence and the, at times, stereotypical characters.