Joss Whedon’s star-crossed TV space-western Firefly comes full circle this week with the DVD release of its feature film follow-up, Serenity. Thanks to devoted fans, the poorly marketed and quickly cancelled series did so well in its DVD release that Universal gave Whedon a green light to bring his crew of ragged, wisecracking space outlaws to the big screen. And now, just months after leaving the theaters, they’re shrunk onto a shiny little disk you can watch at home on your TV – where, incidentally, you can also catch the original series in rotation on the SciFi Channel.

And Whedon – who declares he’s not interested in making things people will like, only things they’ll love – has served up another lovefest. The film has all the story, drama, and character development a fan of the show could want as well as enough action, humor, and special effects to entertain neophytes. The cast, whose closest thing to a star is Ron Glass of Barney Miller fame, is charming and talented; though good-looking, they seem real enough to convince as fringe members of society. The dialogue is taut and witty, the direction fast-paced without being too busy, the action thrilling and the computer effects seamlessly integrated with the live-action photography.

On the surface, the Serenity universe could hardly be more different from the world Whedon created for his two earlier (and far more successful) TV series, Buffy the Vampire Slayer and its spin-off Angel, which aired for seven and five years respectively. Like Serenity, those shows focussed on scrappy teams of adventurers, but the Buffyverse was infested with supernatural creatures and dominated by mystical powers, demons, magic, religious iconography, gothic romanticism, and a past that reached powerfully into the present. The Serenity “‘verse,” by contrast, is dusty and messy, peopled by thieves, prostitutes, suck-ups, disgruntled veterans, and garden variety assholes, and it’s all about now: today’s heist, tomorrow’s bar fight, next week’s adventure. And although as with most futuristic epics there is a backstory, it exists mostly to explain what made our heroes outlaws.

Like the galaxy of Isaac Asimov’s seminal Foundation trilogy (yes, I know there were more than three books, but there were only three books), Whedon’s futureverse is inhabited only by humans, spread among rich central planets (ruled by the “Alliance”) and poorer, more lawless outer worlds where everyone’s just “folk” and, not coincidentally, most of the action takes place. The story centers on River Tam (Summer Glau), a teenager whose cruel abuse at the hands of Alliance mad scientists has made her into a dangerously unstable human weapon, and her doctor brother who cares for her as they evade the authorities on board Serenity. 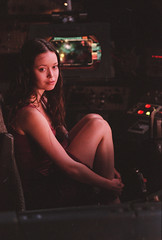 A ruthless, unnamed Operative (Chiwetel Ejiofor in a subtly creepy performance) is sent by the Alliance to recapture River. In the ensuing action, one of the TV series’s interesting mysteries is explained, River has a wonderfully Buffy-like action sequence, freedom of speech and independent thought is championed, and an Emperor-Has-No-Clothes message (very resonant in America circa December 2005) is beamed to the Universe. Our heroes’ climactic battle is waged in defense not of property or homeland, nor even of lives, but of the truth.

Whedon, who both wrote and directed, proves himself as skillful a storyteller in the self-contained movie format as he is in the serial. The most interesting of the DVD’s bonus features are probably the deleted scenes, not because of what they reveal about the story, but because you can really see why every single one of them was unnecessary to the telling of the story and thus correctly dropped from the narrative. There are also some funny outtakes, reflections by the filmmakers on the movie’s unusual path to creation, and appreciations of and by the fans who made it possible. But the main reason you’d want to own this movie is that it’s worth more than one viewing. The details of the cinematography, the fast pace of the action and dialogue, and the pathos of the ending all become richer upon a second (and third) look.