Guess what squawks more than three French hens and has the aroma associated with the lords once they're done a-leaping?

It’s the Christmas season. The air of charity surrounds us. Peace on Earth, goodwill to man, crass commercializations, and blatant cash-ins. Can you smell the figgy pudding? Do you hear what I hear? Do you wish that stink and noise would stay away in a manger?

As a huge fan of Christmas music – my iPod currently has roughly 500 Christmas tunes on it – I’m always game for a new entry into the genre. How hard could it be? You take a bunch of classics, add one or two originals to them, and voila, you’ve got yourself a CD that record stores can trot out every Christmas for the next decade (or longer if you’re lucky). Everyone seems to have gotten into the act — this year Sarah McLachlan has released one and last year Brian Wilson put one out.

Well, add to all the hubbub a new release from Magic Tree, Inc and Inov8Productions entitled Santa’s Sing-a-Long!, which is handily available as a DVD through the Santa's Sing-A-Long website. And, there’s even a companion soundtrack available on CD. I do highly recommend reading the full review, but if you wish to stop reading at this point, I will tell you that I will not be adding the soundtrack for Santa's Sing-a-Long! to my iPod and that’s something.

The entire endeavor is just plain disturbing. And I can’t say that enough — top to bottom, Santa’s Sing-a-Long! is one disturbing video. The elves are clearly just kids in costumes, I get that, that’s far easier and less 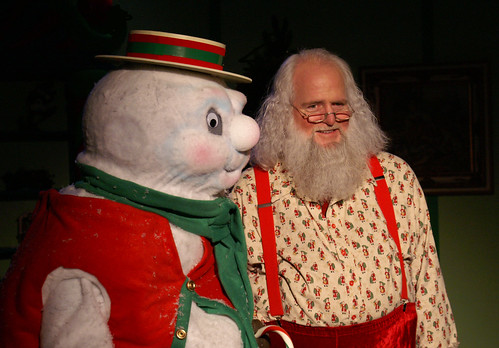 expensive than any other form of elf one could put on screen. Why they have neon green hair, though, I can’t imagine. For that matter, the entire background is green. Everything is green and I don’t understand why.  Maybe Santa is upset at the bleakness of the North Pole, but why there are various greens everywhere I don’t understand. More disturbing than that, however, is their snowman, Snowy the Stand-Up-Comic Showman. His cheeks stick out in a moderately grotesque fashion and have blush on them. I wasn’t sure that he wasn’t about to go on a murderous rampage on the set. And, make no mistake about it, the set clearly looks like a set; not for one moment did I believe, even slightly, that it was in a living room, much less Santa’s living room.

And what of the music itself? Surely that’s the most important thing at issue here. If songs sung by Santa and the elves are enjoyable and fun surely the low production values can be overlooked. The songs are great. Make no mistake, they’re classics. At least the 15 of them that are legitimately classic Christmas carols are. Even the song penned for the DVD isn’t bad. The renditions of the songs, however, leave a lot to be desired. The audio sounds somewhat muffled and after a short period of time the children, though they try, are grating. 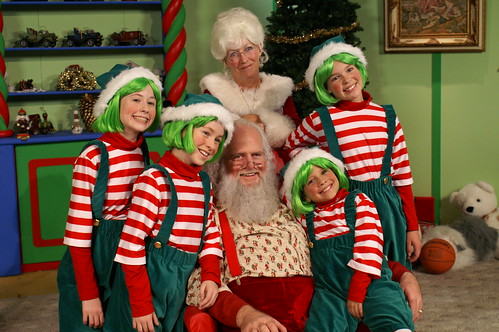 On the upside, there are some cute and interesting moments, such as when Santa explains what figgy pudding is. They even go on a sleigh ride (thanks to blue-screen technology) which has its childlike moments.

Unfortunately, these moments are too few and simply don’t make up for the audio and low quality production values.

The DVD can be watched both with and without on-screen lyrics (though if you’re watching without, it’s not much of a sing-a-long, is it?) and has a blooper reel as an extra feature. Sadly, after one mistake that appears in the blooper reel, an elf says something along the lines of “that has to appear in the blooper reel,” which really kills any fun or humor that could be had from the reel — it feels too planned.

If you decide you want to check the DVD and CD (which has the same songs as the DVD plus a couple of bonus tracks and sounds marginally better) out for yourself, the DVD is available for $17.99 and the CD for $11.99. The materials I’ve been given state that both can be gotten as “Santa’s Special” for the low price of $29.98. Which, according to my calculator is exactly what you'd pay if you bought them separately.

Merry Christmas to all! And to all a goodnight!