How often will Billy Holiday, Nina Simone, and Dinah Washington serenade you while you're sitting at home?

Billie Holiday, Nina Simone, and Dinah Washington: three names that resonate because of their contributions as vocalists of power and distinction, yet each one was as different from the other as if they sang separate genres of music. In spite of their differences, they are all three associated with Jazz and Blues and the casual observer would be left thinking their work would be similar in style.

Nothing could be further from the truth, and all it takes is the simple expedient of watching the three women perform one after the other to dispel that erroneous impression. Such an opportunity is presented by a new DVD released by EFOR Films called simply Volume 1 Jazz Voice: The Ladies Sing Jazz. The three aforementioned ladies are featured over the course of an hour singing some of the songs they are best known for. Thrown in as extras: one song by Ethel Waters and the Count Basie Orchestra, and two numbers by the Gene Krupa Band featuring Anita O’Day on vocals.

Billie Holiday was probably the purest blues singer of the three. Although Jazz influences are present in her musical arrangements, it is in her interpretation and presentation of material that the designation of Blues singer is appropriate. 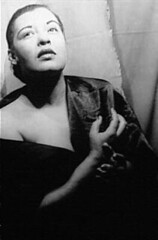 Perhaps because of her life, both before she was a vocalist and during her career, full as it was of poverty, abuse, and drug addiction, she brought that bittersweet element we associate with blues to all of her work. But whatever the reason, there was, and still is, something chillingly mournful about her plaintive sounding tone. This was only accented as her career continued and her voice became harsher from bad living and illness.

The eight clips of Billie Holiday contained in this disc are unfortunately of varying degrees of quality in regards to sound and video. But they are sufficient to give one an idea of the ups and downs in her life. Compare the thin-cheeked, haggard-looking woman who sings on track two through four with a strained voice (the camera even catches her clearing her throat before track three, sounding as if she has pneumonia) to the full-faced woman in the studio singing “Fine and Mellow” with confidence and smiles.

In the latter, the familiar and almost childlike voice is in beautiful form, while in the earlier three tracks she sounds rough and strained. While her phrasing and intonation are as impeccable as ever, it is an uncomfortable sight to see such a fine singer labouring with a voice that is not co-operating in all the ways she wants. I find it unfortunate that they couldn’t find other material of her singing to include in this collection. Although historically accurate, it does not show Miss Holiday at her best.

In fact, of the eight tracks used to represent Billie Holiday, only track five, “Fine and Mellow,” is good enough to give an accurate impression of her quality. There are three tracks included from what appears to be a television performance where the editing is so abrupt that the beginnings and ends of the songs are cut off. As an aside, one of the major drawbacks of this disc is the lack of any sort of information concerning where and when the performances of any of the artists took place. It’s not essential information, but it would be nice to know who the members of the band are and to have some sort of frame of reference in terms of where the artists were in their careers.

Nina Simone would probably have hated to be included in this collection. Not because she wouldn’t have appreciated being in the company of people like Billie Holliday and Dinah Washington, but because of her rejection of the term Jazz. “Jazz is a white term to define Black people. My music is Black classical music,” are not the words of a woman who wants to be pigeonholed by anyone. 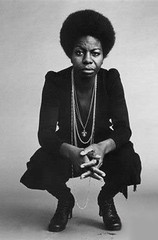 Nina Simone, unlike the other two featured vocalists, was an accomplished instrumentalist as well. She had studied at the Juilliard Academy for the arts in Piano until she was forced to withdraw because she lacked the money to continue. This meant, of course, that she was not content with standing behind the microphone and simply singing material that was chosen for her.

While her later career might have expanded to include more popular genres like soul and pop music, she recorded covers of the Beatles song “Here Comes The Sun” and Bob Dylan’s “I Shall Be Released.” The tracks on this DVD focus on earlier, more Jazz-influenced numbers. But even these tracks show her willingness to step beyond the boundaries of mainstream jazz through her singing of either music written by or influenced by African musicians.

“Zungo” is a song that she and her band were taught by the African musician Michael Olatunji, and is a chain-gang song that sounds as if it could be of Zulu origins. On the unaccredited “There Is A Book Of Love” the African influences are just as pronounced through the use of specific rhythms and the introduction of a solo tom drum player.

It is obvious from watching these clips of Nina Simone that she represented a new era of Black female vocalist who was wanting to take charge of her own career and push her music in the directions she was interested in. Her abilities as an instrumentalist, showcased in her own composition “Improvisation,” gave her a freedom her predecessors lacked.

Again, her performances on this disc are hindered by poor sound quality. On the first four tracks, her vocals are almost buried under the instruments to the point of it being hard to discern her lyrics. Being that her voice is in a lower register, in addition to being soft and melodious, this made it all the more difficult to discern. But the final two numbers are from a different source and provide a much better indication of her abilities.

Dinah Washington is the third of the featured ladies on this disc, and she again represents another side of the jazz/blues music scene. Although referred to in her day as the “Queen of the Blues,” she was far more a pop singer than either Billie Holliday or Nina Simone.

Her sound was more big band swing than either of the other two women and had a much wider commercial appeal. She started with the Lionel Hampton Band and that set the tone for her career. She recorded songs ranging from the standards to a cover of Hank Williams’ “Cold, Cold Heart.” She was also an accomplished gospel singer, but point blank refused to record that music, insisting that it had no place in the secular world. 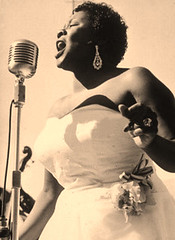 The six songs on this DVD featuring Dinah probably have the best sound quality for any of the three main performers and give a very good indication of both the type of music she favoured and her big, powerful voice. Like other singers with a gospel background (Aretha Franklin would be the best contemporary example), Dinah’s voice was strong, passionate, and could wring a note for all its emotional worth.

Judging by the selections presented, her control was such that she never once stepped over the line into the melodrama that so many of the current crop of torch song singers confuse with emotion. (Celine Dion, anyone?) Listening to her performance of “I Don’t Hurt Anymore” is to hear a singer celebrate the joy of being released from the chains of a love gone bad.

There is a joy in all of her singing that is infectious and goes a long way in explaining her widespread popularity. Even on tape you can feel her energy bursting through as she “sells” her material. She was definitely far more a show person than either Billie Holliday or Nina Simone, but that in no way diminishes her talent. She may have had more commercial appeal than either of the other woman, but she was no less exciting or entertaining for it.

Volume 1, Jazz Voice: The Ladies Sing Jazz may have some technical flaws with regard to sound and picture quality, but the compensation of having the opportunity to compare these three unique women in one sitting more than makes up for them. How often will Billy Holiday, Nina Simone, and Dinah Washington serenade you while you’re sitting at home? That in itself makes this a great buy.