Every now and again, I like to lower my brow a bit from its already indeterminately stumpy position and give in to the vulgarity of animated shows like Seth MacFarlane’s Family Guy, which has infiltrated our homes once again in Fox Home Entertianment’s release of Family Guy: Volume Nine, now on DVD. At times, it’s so unbelievably crude, that you wonder what Seth and his gang are smoking, but the assortment of pop culture references, politically incorrect jokes, and musical oddities make it worth devolving your sense of humor a tad (though it’s recommended that you pick out a palate cleanser and have it ready to go after you’re done with this). 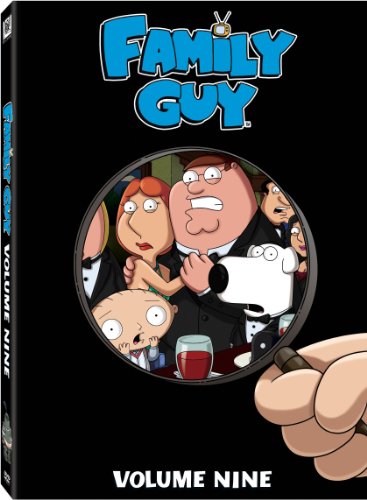 Keeping up with some of their past home video releases, Family Guy: Volume Nine is a half-season set. Actually, it’s not even that: the three-disc set brings us fourteen uncensored and often extended episodes from the long-running controversial Fox series, but contains Episodes 9 through 19 of the twenty-one chapter Season Eight, and the first three installments from Season Nine (nothing like consistency, eh?). We begin with “Business Guy” (with a guest appearance by Hugh Laurie as Dr. House), wherein our titular “hero” Peter Griffin (brought to animated life by writer/creator Seth MacFarlane himself) takes over his father-in-law’s corporation after he accidentally causes the old man to have a heart attack.

Every series needs to have its share of oh-so “cliché” episode(s), and Seth MacFarlane and Co. toss in the proverbial amnesia episode (“Big Man on Hippocampus”), as well as the “people-trapped-in-a-room” episode (which in this case, is also the 150th Episode), the double-length “Brian & Stewie” — which succeeds in being both extremely offensive and enormously heartfelt at the same time (and also gave the rest of the cast the day off, as Seth MacFarlane voices both characters). Additional highlights include “Extra Large Medium,” which has Peter pretending to be a psychic, while his eldest son, Chris (Seth Green), attempts to win the heart of a girl with Down Syndrome (to wit young Stewie sings one of the greatest off-kilter songs ever, “Down Syndrome Girl”).

Family Guy: Volume Nine brings us more off-color amusement in the guise of “Quagmire’s Dad,” wherein Peter’s friend and neighbor discovers his decorated army hero father is not what he always envisioned him to be; something Brian, the family dog, also finds out. Series semi-regular James Woods (played by James Woods) — who is a recurring nemesis on the show — hosts “And Then There Were Fewer” (the premiere of Season Nine) the show’s homage to Agatha Christie’s immortal novel, And Then There Were None, as well classic murder mystery movies in general. Other guest stars (recurring or otherwise) include Adam West, Jason Mraz, Rush Limbaugh, Phil LaMarr, Shelley Long, Rainn Wilson, Drew Barrymore, Patrick Stewart, Dwayne Johnson (who appears in live-action footage), Anne Hathaway, Jennifer Tilly, Carrie Fisher, Richard Dreyfuss, Nana Visitor, Elijah Wood, and Charlie Sheen.

The Season Eight episodes are presented in a 1.33:1 ratio, while the Season Nine episodes are in 1.78:1 anamorphic widescreen. All episodes feature English 5.1 Dolby Digital sound, with Spanish and French Dolby Surround available for select outings. Subtitles in English (SDH), Spanish and French are also on-hand, as are an assortment of special features. The bonus goodies include audio commentaries on select episodes, deleted scenes, several featurettes and behind-the-scenes items, and an episode from Family Guy’s spin-off, The Cleveland Show.

As a special note, I should point out that this set does not contain the originally-broadcast (read: censored) episodes from the Fox Network. This might irk some patrons out there, but nowhere near as bad as the whole “incomplete” season thing will an even larger number of you. Nevertheless, Family Guy: Volume Nine is a raunchy ride that is definitely not safe for the entire family.

Adam West Will Always Be My Batman

West managed to convey to us that he respected the Batman character despite the apparent frivolity of the series.