The foghorn-throated rap superstar turned his impressive instrument upon the help when asked to buckle his seatbelt.

DMX has taken his road-rage act to the air. The foghorn-throated rap superstar and co-star of movies Cradle 2 the Grave, Romeo Must Die and Exit Wounds, turned his impressive instrument upon the help when asked to buckle his seatbelt upon approach to London’s Heathrow airport on an American Airlines flight from New York over the weekend.

Another rapper/actor has now learned what Snoop Dog gleaned a few weeks ago: the customer is not always right in and around British airports.

“Heathrow Police were called at 12:05 pm on Saturday to reports of a passenger causing a disturbance on an inbound aircraft,” a Scotland Yard official said in a statement. “The plane landed at approximately 12:15 pm and a 35-year-old man was arrested on suspicion of being verbally abusive to cabin crew.”

DMX — real name Earl Simmons — was released with a caution: ie, next time shut up and buckle your seatbelt. 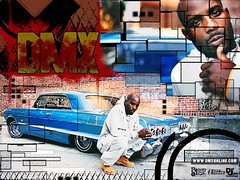 The Baltimore-born, Yonkers-raised artist will release his sixth solo album, Year of the Dog, Again, this summer, and was heading to London for a “secret launch party” scheduled for Tuesday. The star will also star in a reality series on BET this summer called DMX: Soul of a Man, where he will be seen visiting the kids in Arizona and driving fast.

Transportation and DMX do not get along. In 2004 he was arrested at JFK Airport in New York after coming unglued over a parking space and ramming a gate with his SUV. He then shattered the terms of his probation by driving with a suspended license at 104 mph in upstate New York. For good measure, driving again with a suspended license, he rammed a car, which in turn struck a police cruiser in the Bronx in ’05.

In November of 2005, DMX was sentenced to serve 70 days on Rikers Island for the infractions, though he was released on December 30 for good behavior – no cars in the joint.