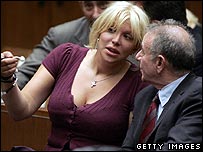 Courtney Love, 41, has once again slithered through the jailhouse bars (although this time it took a full tub of Crisco – note pic).

She was sentenced Friday to six months in a rehab center for slipping off the druggy wagon while on probation for previous drug offenses and going postal on a woman with a whiskey bottle and a lit candle in her ex-boyfriend’s house in April of ’04.

Los Angeles Superior Court Judge Rand Rubin sentenced Love to the rehab center, where she has already been living for a month, rather than jail, noting that she had made an “excellent first step” toward recovery. “I’m very pleased with your progress,” the judge also said.

Love will be confined to the center, subject to random drug tests, and the judge extended her probation until March 2007. The former Hole singer and widow of Kurt Cobain thanked the judge. Love’s attorney Howard Weitzman said she “fully intends to make good on her promise to be clean and sober, and I’m hoping she’ll be able to do that.”

Hope yes, but I wouldn’t bet the farm on it at this point.

Graphic Novel Review: ‘Leonard Cohen: On a wire’ by Philippe Girard from Drawn+Quarterly