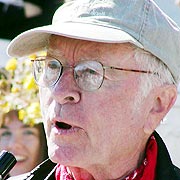 Comedic actor, director, and voice-over great Howard Morris — who died Saturday at the age of 85 — had his hands all over some of television’s finest shows over a 50-year career.

Morris was an indispensable cast member — along with Carl Reiner, Imogene Coca, and Louis Nye — of Sid Caesar’s Your Show of Shows (written by the likes of Mel Brooks, Neil Simon and Woody Allen) from ’51-54, then joined Caesar on Caesar’s Hour (’54-’57). In the ’60s the Bronx-born actor appeared in the indelible role of unhinged hillbilly Ernest T. Bass in several episodes of The Andy Griffith Show, and starred in the classic “I Dream of Genie” ep of The Twilight Zone (where he became the genie).

The versatile performer also appeared in feature films Boys’ Night Out, 40 Pounds of Trouble, Jerry Lewis’ The Nutty Professor and Way… Way Out, Brooks’ High Anxiety, History of the World, Part I and Life Stinks.

Morris, who performed and directed everything from Hamlet to Five Jerks in a Jeep in an army entertainment unit during WW2, went on to direct the classic pilot for Get Smart, and episodes of The Bill Dana Show, Gomer Pyle, U.S.M.C, The Andy Griffith Show, The Dick Van Dyke Show, Hogan’s Heroes, Get Smart, Bewitched, Love, American Style and The Love Boat.

He also directed feature films Who’s Minding the Mint?, the Doris Day-Brian Keith family comedy With Six You Get Egg Roll, Don’t Drink the Water with Jackie Gleason, and Goin’ Coconuts with Donny and Marie Osmond.

Morris’ prolific and durable voice-over career spanned 40 years (including a long stint with Hanna-Barbara), and included the starring role of Atom Ant, the Qantas Airlines koala, Gerald McBoing-Boing in Columbia cartoons, and regular appearances on The Flintstones, The Jetsons, Beetle Bailey and His Friends, Magilla Gorilla, The Archie Show, Winnie the Pooh (Gopher), Sabrina, the Teenage Witch, My Favorite Martians, Garfield and Friends, DuckTales and Cow and Chicken!

Howard “Howie” Morris Morris appeared in a Broadway production of Hamlet, in the original run of the musical Gentlemen Prefer Blondes, and was married six times, for the last time at the age of 80.