But mainly it's about the music, and wisely they let Charles Mingus speak for himself when it counts.

Have you ever noticed that jazz music seems to mean different things to different people? To some it means the sounds of the ragtime piano or the frenetic pace of the Charleston. To others it means Charlie Parker, Dizzy Gillespie, and any of the other bebop stars of the forties and fifties.  Then there are those who would consider the lush arrangements of Tony Bennett and Mel Torme to be the epitome of the jazz sound. At the other end of the spectrum are those who will only listen to the almost psychedelic improvisations of the later John Coltrane and claim that is the true sound of jazz.

Jazz is like the serious older brother of rock and roll, blues and all other forms of popular music. It gives off the pretence of being the home to musicians who have studied the intricacies of structure, form and melody in a way that their more carefree siblings have bypassed. While pop music forms have a broad audience appeal — hence the name popular — jazz usually has a far narrower slice of the musical audience pie.

Like orchestral music, a lot of jazz can't be thrown on for easy listening. It requires your attention and understanding to fully appreciate what the ensemble in question is attempting. Even on what are considered standards, or popular pieces, like Gershwin's Porgy and Bess, it’s the unexpected that offers the true delights for the jazz fan.

For all the discipline and knowledge that is required to play jazz, it is also the form of music that lends itself most easily to improvisation and intricate lead work. Comparing an orchestral solo, or a blues-based rock lead with a jazz improvisation is a meaningless exercise, except it does lend itself to reflection upon how they all differ.

While an orchestral solo is confined by its score and a rock solo by its key, jazz solos can appear to have no boundaries whatsoever. What may begin as deceptively simple-sounding runs up and down a scale can quickly escalate into something with little or no resemblance to the original motif. Listen to John Coltrane's 20-minute rendition of "A Few Of My Favourite Things" from the Sound Of Music and you won't recognise it as the saccharine song sung by Julie Andrews save for an occasional return to the original tune. 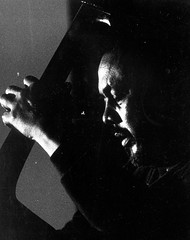 In order to meet the demands required of such scores he would not only write a piece with specific musicians in mind to play certain parts, he would carefully select his band members by their abilities not only with their instruments, but how well they could interact with other musicians.

Equally feared and revered throughout his short life for his perfectionism and drive to create incredible music, Mingus' life is riddled with stories of on-stage confrontations with fellow musicians and audience-members. At one time he was reported to have stopped his band in mid-song to chastise his audience, who were merrily chatting away and clinking the ice in their drinks, saying, "I bet Isaac Stern doesn't have to put up with this shit"

It would be hard to imagine how this driven perfectionist must have felt when he first started to feel the effects of the amyotrophic lateral sclerosis (Lou Gehrig disease or A.L.S.) that would eventually kill him at the age of 56. Confined to a wheelchair and unable to play bass any longer, he still remained active composing music. He died while working on one last project, a collaboration with Joni Mitchell on her album Mingus.

Aim Records of Australia has released a really nice two-disc reissue Thrice Upon A Theme, taken from two separate sessions. The first session from 1954 features a full band and was originally released on two 10" LPs. The second disc features a session from 1957 with just Mingus on bass, Hampton Hawes on piano and Danni Richmond at the drums.

Richmond was to play with Mingus for the rest of the bass player's life, making them one of the most amazing rhythm sections of all time. Even at this early stage of their career together, one can hear their cohesiveness, and the potential for what is to come.

Both discs feature original compositions by Mingus (on the second disc his band mate Hawes contributes "Hamp's New Blues"), and interpretations of familiar tunes. The tracks on disc one give the new listener a chance to appreciate Mingus' ability to compose for a good sized band, and shows off the distinctive improvisational opportunities he allowed each band member.

Standards like "Stormy Weather" and "What Is This Thing Called Love" are anchors of familiarity that allows an easing into the less conventional tracks on disc one. With the latter opening and the former closing the disc, comfortable bookends are provided for the less experienced Jazz fan.

Disc two is the more adventurous; even the inclusion of George Gershwin's standard "Summertime" probably doesn't provide the comfort of the earlier recordings known pieces. While the tune is still recognizable, the tempo it's played at is enough to render it almost alien.

Mingus was never content to just play someone else's music; he would always have to put his own personal stamp on the material. This "Summertime" is not a lazy afternoon fishing down by the creek or watching the cotton grow. It's a fast trot that creates a far less idealized vision of the Deep South and rural poverty.

Thrice Upon a Theme is a fine example of a musician and composer being caught at the moment that he is just beginning to enter the prime of his career. Here you will hear all the trademarks of Mingus' great career: experimentation, improvisation, and unique interpretations. This is a great opportunity to pick up a couple of early Charles Mingus recordings.

Great care has been taken with the sound, and unlike other albums remastered from this period you wouldn't know by the quality that they weren’t recorded recently. No background noise clouds the music or obscures the quieter moments, and simultaneously there is no distortion on any of the fuller pieces. It comes with a nice, concise two page summery of his career, and some of the background of the recordings on the disc. But mainly it's about the music, and wisely they let Charles Mingus speak for himself when it counts.

Cave and Ellis impress with their continued collaboration in this memorable body of work, which comes highly recommended.