...one of those rare occurrences where the music hasn't suffered to get the message out.

Occasionally something happens, or you come across something, that snaps your head back and makes you just say “Wow.” That happened a few months back for me when I came across the site put together by The Fire This Time.

Now anyone who has read anything I’ve written on a consistent basis will know that I’m pretty hard line when it comes to the issue of Native and Indigenous Peoples’ rights. For me, benefit of the doubt is always ceded to the Native people. But if I thought Canada was bad, compared to how indigenous peoples are treated the rest of the world over, we’re damn saintly.

We don’t burn them alive in the streets for fun anymore, we’ve stopped appropriating their land, and have actually even started giving back some of what we stole. You can’t give back the sense of pride in self and people that was stolen, but at least we can give back the means to hopefully develop a new pride in themselves. If the new government in Canada honours the commitments of the previous one, agreements reached in the last year with the provinces and First Nation leadership will go a long way to redressing that imbalance.

But from Fiji to Brazil, and Chile to Indonesia, there has been little or nothing done to redress the imbalances of the last 500 years, or more, of oppression. Homelands are still being given away or stolen with government complicity. Peoples are living lives of such poverty and desperation, it has earned them the honour of their own designation: Fourth World.

Aside from their living conditions, the biggest obstacle facing these people is the complete indifference of the world to their fate. Aside from the occasional celebrity using them as colourful backdrops for soon-to-be-forgotten photo shoots and press conferences, and the occasional “Indian Uprising” like the Zapata in Mexico, they pretty much fall into the category of ‘out of sight, out of mind.’

The Fire This Time (TFTT) is seeking to change this. Using music, video, visual arts, and direct involvement with the affected communities and peoples, they are working to give the silenced a voice. IR2 (Indigenous Revolution) is the music project they have developed as a step in that direction. 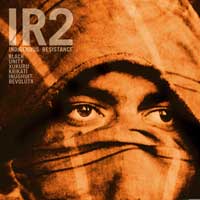 It was a link from one of the participants in the IR2 project, the group Asian Dub Foundation, that led me to the TFTT site in the first place. Along with members of Asian Dub, some of the leaders of the Dub music scene from around the world have pooled their talents to create music and lyrics for this album.

Individuals like Adrian Sherwood, Chuck D, and members of groups like Underground Resistance, 3 Generations Walking, Soma Mestizo, and a host of others have offered up their services to either provide production skills, lyrics, or music. But where this differentiates from the usual “celebrity” benefit album is how individual songs are constructed.

Take for example track #3, “Indigenous and Sacred”, which features the words and music of elders, musicians, and singers from the Solomon Islands and Sosiakamu, plus Soy Sos of 3Generations Walking and Christiane D. of Soma Mestizo. The musicians are based on three separate continents, which made it hard for them to work in the same studio together.

All the tracks had to be emailed back and forth between three locations around the world. The music and words from the Solomon Islands and Sosiakamu formed the core of the song. Soy Sos and Christiane D. had the job of incorporating their music into a mix that allowed the original music to stand out.

Dubbing techniques of repeating samples to emphasise certain phrases musically and lyrically are utilized to keep bringing our focus back to what is important. The language barrier disintegrates as the voices of elders chanting for calm and tolerance are repeated. Sounds elicit an emotional response as readily, if not more so, than actual words, a fact borne out by the impact of this track.

All of the songs on this disc are of a similar construction. Whether it’s music underpinning a spoken word essay on the murder of Brazilian Indian Galdino, burnt alive by four wealthy teenagers for a joke, or the lyrics of indigenous Fijian women and music from Brazil on the track “Revoluta”, these songs are all true collaborations involving countless emails, remixing and changes as each party strive to strike the right tone to best reflect who they are working with.

The songs and lyrics on this disc are unabashedly revolutionary. They see injustice in the world and demand change for the oppressed. But unlike the hypocrisy of hearing these words come from the lips of a multimillion dollar grossing recording star, they come from the people directly involved in the struggle to survive.

Unlike the new age, “native” discs of peace and tranquility you can find in your supermarket, these are songs of unrest and disquiet. You’re not going to receive any spiritual guidance from this music, but if you are willing to listen, you will get an education and a sobering reminder that people are dying every day just because they are indigenous.

The music on this disc is superlative, but there’s more reason to listen to it than just the content. Some of the best Dub performers have contributed their talents and technological expertise to make this great musically. It’s one of those rare occurrences where the music hasn’t suffered to get the message out.

Unfortunately, this disc is not available to be purchased. No label has yet to express a willingness to release it. They have no problems selling music that advocates misogyny, violence, and drug use in the ghettos of North America, but seemingly balk at a little truth-telling.

But you can download various versions of some of the songs in MP3 format. Even more uniquely, TFTT has made available for download the individual tracks that have gone into making up some of these songs. There are chants, a cappella vocal tracks, and music tracks in MP3 format that can be downloaded for utilization in making your own music.

This is part of how they are trying to give people a means of expression that has been too long denied them. For all those who complain about how the Internet is misused, to me this is an example of it living up to its potential as a means of sharing information and helping other people.

The Fire This Time is a fascinating project, and collaborative effort between peoples of all continents trying to improve the conditions that far too many people are forced to live in. I hope to make this the first in a series of pieces about the site and the people behind it.

Please, take the time to check it out carefully and listen to the songs they have available for download. The music is great and the message even better.