Britney Spears: I’m Not A Girl, Not Yet Much Of A Mother

In the latest of the Britney-vs.-motherhood chronicles, our heroine is faced with the challenge of walking, holding a baby, and carrying a glass of water — all at the same time! — and all under the watchful gaze of paparazzi, onlookers and bodyguards specially trained in defense against the dark arts of stupidity and clumsiness.

The incident occurred while Spears was leaving the Ritz-Carlton hotel in New York yesterday afternoon. Surrounded by bodyguards, the pop-singer was holding baby Sean in her left arm and a glass of ice water in the other when she seemingly tripped on the hem of her pants. 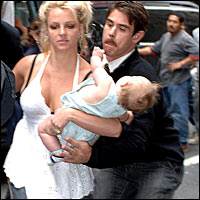 Baby Sean’s head reportedly “whipped back” in what eyewitnesses called a “violent” manner and his precious little orange hat flew off. Fortunately, one of her bodyguards — ever vigilant — sprung cat-like into action and gave Britney and baby an assist. Two points for the man with the mustache!

TMZ, always on the job and up in your grill, captured in still life this artistry in motion. What would otherwise be a minor blip on the radar for a normal mother with small children is now one more rusty car on blocks in the unmowed lawn of Britney’s reputation. 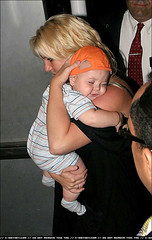 After the incident, Britney is reported to have said, “This is why I need a gun.” Not sure why she said that, just thought I’d mention it. 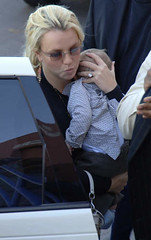 And lest you think me cruel, think again, because I have the deepest empathy for young Ms. Spears.

In later updates on the story, a very shaken and upset Britney is seen crying, holding baby Sean, who seemed just fine but possibly wishing he had a set of parents whose combined IQ’s eked into the triple digits.

In all seriousness, this kind of crap happens all the time. People trip, babies have mishaps, and it is NOT a reflection on the parents or their love and genuine concern for their children. It’s human nature to screw up.

What this does illustrate for me, though, is that Britney, now pregnant for the second time, is NOT getting the support she needs from her absent and pathetic excuse for a husband. 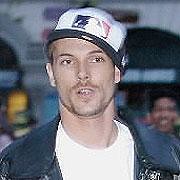 Kevin Federline, best known for spreading his man-seed willy-nilly, is really the one who should be critically scrutinized – and not just for his poor choice in headgear, facial hair, hygiene, wardrobe, and likely his aftershave. I’m guessing at that last one – he looks like an Old Spice/Hai Karate man to me.

Could this be what Britney wanted the gun for?

My point — and I do have one — is that Britney is trying — bless her little pea-brained heart — to be a good mother. With her wealth, estimated at over a whopping $150 million, Britney has enough money to keep baby Sean home with a whole pack of Consuelas during the day. Instead, she’s made a conscious choice to keep him close.

One might speculate upon the reasons for this: to compensate for a lack of loving, trustworthy people in her life? The baby-Daddy is an even bigger moron and can’t be trusted to take care of the lad? Or maybe she just likes the little peeper.

Either way, I worry for her sanity. With another on the way, Britney is going to need a break from the calamity that seems to follow her in her journey through motherhood: a journey that seems more perilous than that of most.