Since January, the Recording Industry Association of America (RIAA), employing the “John Doe” litigation method, has sued more than 2,000 people.

The RIAA is using this method because the names of the 477 people accused of illegally distributing copyrighted sound recordings on peer-to-peer services were not yet known, according to a spokesman for RIAA.

The trade group has identified suspected song-swappers by Web addresses only since an appeals court in December sided with Verizon Communications by ruling that Internet Service Providers did not have to respond to subpoenas, filed as a prelude to lawsuits, requesting names of users.

As in previous suits, the RIAA plans to discover swappers’ names and locations through court-issued subpoenas, the spokesman said.

Wednesday’s action was directed at file sharers using commercial ISPs as well as 69 people at 14 universities, including Brown, Emory and Princeton.

The RIAA has filed 2,454 lawsuits since September, including suits filed before the “John Doe” method became mandatory, and has settled 437 cases for about $3,000 each.

“It remains as important as ever that we continue to work with the university community in a way that is respectful of the law as well as university values,” said Cary Sherman, the RIAA’s president.

….”The lawsuits against students and individuals are not working and we hope the record industry will come to its senses and arrive at a new strategy,” said Fred Von Lohmann, a lawyer for Electronic Frontier Foundation, a non-profit cyber-liberties group.

“There is no clear answer on this. There are consumers who are becoming more aware of the issue of prosecutions but by any standard, there are millions of people still using these applications,” said Mike McGuire, analyst at GartnerG2.

A new survey by the Pew Internet & American Life Project showed the number of people who say they download music, both legally and otherwise, swelled to 23 million from 18 million since the group’s last survey in December. [Reuters]

The industry continues to sue its customers for engaging in an activity that at worst appears to cause them only slight harm, and at best may actually increase their sales. 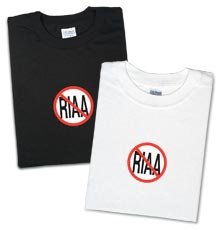