Tom Hamilton recuperating at home after seven weeks of treatment for throat cancer.

Aerosmith's upcoming Route of All Evil Tour with Motley Crüe is getting off to a muted start Tuesday, September 5, in Columbus, Ohio. Bassist and founding member of the Rock and Roll Hall of Famers from Boston, Tom Hamilton, 55, will miss the first six weeks or so of the tour after undergoing seven weeks of radiation treatment for throat cancer.

Hamilton will rejoin the tour in mid-October, according to band publicist Marcee Rondan. Filling in for Hamilton, who formed the band in 1969 with singer Steven Tyler and guitarist Joe Perry, will be "longtime friend of the band" David Hull, who played in the Joe Perry 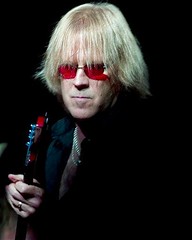 Bassist Hamilton also co-wrote the Aerosmith classics "Sweet Emotion" and "Janie's Got A Gun" with Tyler, who himself underwent successful experimental surgery earlier this year to fix a broken blood vessel on his right vocal cord, forcing the band to cancel about 20 spring shows.

Aerosmith blogger John B. reports on the band's site, "As you all know Tom Hamilton won't be with his brother until mid-October. David Hull has been in the studio everyday going over a countless number of songs. Joey and David usually got into the studio two hours before the rest of the guys to get into a groove. See you in Columbus!"

Through the magic of video tape, while singing on the road with the band, Tyler will also appear on TV Monday, September 25, where he’ll play himself on 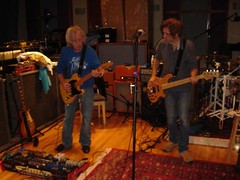 Lastly, the veteran rockers will be releasing another greatest hits CD in October, just four years after their last one, the 2-CD set O, Yeah! Ultimate Aerosmith Hits. "We were working on getting a studio record out, but we just couldn't do it. There wasn't enough time," Perry told Billboard.com. The collection, Devil's Got a New Disguise: The Very Best of Aerosmith, will contain 16 songs, including two new ones, the title track and "Sedona Sunrise."

Thanksgiving Week Is the Start of My Favorite Time of the Year!