The director/star seeking to heal, put the toothpaste back in the tube, and whatnot.

In a taped interview with Good Morning America's Diane Sawyer, Mel Gibson, looking far less wild-eyed and feral than in his recent "John Brown" pics, says that two months after his infamous drunk driving arrest and anti-Semitic tirade in Malibu, California, he is still sober and still loving on the Jews.

Dismissing his anti-Semitic statements in the early morning hours of July 28 — including such choice bon mots as, "F***ing Jews… The Jews are responsible for all the wars in the world" — as "just the stupid rambling of a drunkard," Gibson, 50, says he is working on healing himself and those he offended.

"What I need to do to heal myself and to be assuring and allay the fears of others and to heal them if they had any heart wounds from something I may have said … the last thing I want to be is that kind of monster," he says in an interview that will air tomorrow and Friday morning on ABC. 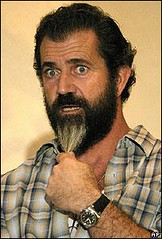 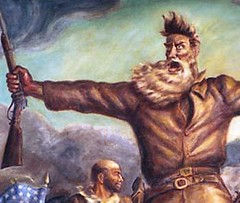 The devoutly Catholic Gibson, whose graphic The Passion of the Christ was considered anti-Semitic by many viewers and was voted the most controversial film of all time in a magazine poll, says he will continue to act and direct and do his own thing.

"I'll always continue to work. I've never much depended on anyone but myself, as far as that goes. And, hey, I'm not under the illusion that everything's just going to be hunky-dory work wise forever. I've never been under that illusion. Things could go away tomorrow," the Braveheart Oscar-winner says.

He says of those who no longer want to work with him due to the outburst, that he feels "sad because they've obviously been hurt and frightened and offended enough to feel that they have to do that. And it's their choice. There's nothing I can do about that."

He also babbles semi-coherently about his struggles with sobriety. "A couple of times, you know, it was like, 'Oh, man, the hell with it,' you know. But you don't, because I have friends and people that care and, you know, you'll fortunately be at the right place at the right time to, you know, reach out and … And many people have reached out. My goodness. I mean it's … I've been overwhelmed."

The "Monster" of alcohol reared its ugly head a couple months before the Malibu bust. "Years go by, you're fine. And then all of a sudden, in a heartbeat, in an instant, on an impulse, somebody shoves a glass of Mescal in front of your nose, and says, 'It's from Oaxaca.' And it's burning its way through your esophagus, and you go, 'Oh, man, what did I do that for? I can't put the toothpaste back in the tube.'"

Gibson's latest movie, Apocalypto, an action-adventure flick set among the ancient Maya, is due out in December.