Two famous men were buried today – the similarities end there.

A fixture of such enduring and consistent good will and humility that he was relatively taken for granted in his lifetime, John Peel will come to be appreciated as one of the most important figures in popular music in the last third of the 20th century: a perpetually engaged fan, making the world safe for new and challenging music via his BBC radio show for over 35 years.

All who has ever programmed a radio show based upon their own taste and instincts, anyone who has ever shared music with a friend would love to have the kind of influence, reception and longevity of the great Peel, who died at 65 of a heart attack while on vacation in Peru.

The list of bands he introduced to the U.K., and world, over the BBC airwaves is staggering: Pink Floyd, The Velvet Underground, David Bowie, Captain Beefheart, T-Rex, Roxy Music, Rod Stewart, The Sex Pistols, The Undertones, The Ramones, The Buzzcocks, The Clash, Joy Division and their later incarnation New Order, The Fall, U2, Pulp, The Smiths, Nirvana, Blur, The White Stripes, and on and on.

He championed all forms of “alternative” music and led the charge for punk, reggae, hip-hop, techno, drum ‘n’ bass, and more extreme music like, say, grindcore.

Thousands of appreciative fans and musicians he supported from around the world gathered to say goodbye and celebrate a life well-lived at his funeral today. Pulp’s Jarvis Cocker, Undertones singer Feargal Sharkey, Billy Bragg, and The White Stripes were among the mourners, while Elton John left a wreath of yellow roses. 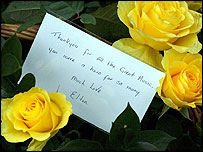 The throng applauded Peel’s coffin as it departed St Edmundsbury Cathedral, Bury St Edmunds, Suffolk, to his favorite song, “Teenage Kicks” by the Undertones. The service bulletin contained a quote from the reggae band Misty in Roots: “When we trod this land, we walk for one reason… to try to help another man think for himself.

The service ended with audio clips of Peel talking about his life: “I’m fabulously lucky, I’ve got everything I wanted as a kid, a house in the country, an astounding wife, and a job on the radio. I don’t know what could be done to improve it.

“If I drop dead tomorrow, I’ll have nothing to complain about – except that there’ll be another Fall album out next year.”

That’s a man who had his priorities on straight – he will only grow in stature as time passes.

Another man, Yasser Arafat, 75, also buried today, had a very different set of priorities, consistently choosing self-aggrandizement over greatness, power and venality over the best interests of his people, conspiracy and concealment over truth, and he will shrink with the passage of time until he is an unpleasant footnote.

The man who embodied the Palestinian people’s dream of statehood and self-determination consistently rejected that attainable dream in favor of a maximalist myth that ultimately yielded only death and heartbreak, and oh yes, sustained his own power.

And contrast the Ramallah funeral scene as well: police firing guns into the air failed to restore order as the tens of thousands of mourners rushed toward the coffin, struggling to be close to the Nobel Peace laureate and terrorist one final time.

Palestinian legislator Hanan Ashrawi thought it was swell: “President Arafat would have wanted it this way, with exhilaration, feelings of loyalty, pain, sadness and love all at once. The people reclaimed him. They wanted to say goodbye without distance,” she told the AP.

More on the scene [video here]:

outside the compound walls, the gathering mourners, who were supposed to stay out until after the burial, grew impatient, chanting, “We want to see Abu Ammar,” Arafat’s nom de guerre.

Teenagers found a gap and slipped in; outnumbered police quickly opened the gate.

The crowd, waving Palestinian flags and banging drums, swarmed inside as security forces formed a cordon to make room for the two-helicopter flight. But it collapsed as mourners rushed the aircraft, delaying the unloading for 25 minutes and forcing police to fire in the air.

The flag-draped coffin was finally removed and placed on a jeep. Police jumped on top of it, waved and flashed the victory sign. People chanted, “With our blood and our soul we will redeem you Yasser Arafat!” and the frenzied crowd pulled the red, green, white and black flag off the coffin.

….the pandemonium and bursts of gunfire were at odds with the image of control and orderliness that Arafat’s successors wanted to portray.

“It is not what we expected,” said Palestinian Cabinet minister Saeb Erekat. “I expected much better, more organized, but things got out of hand, unfortunately.”

As unsurprising as it is fitting: the chaos the unheroic leader unleashed consumed him literally and figuratively in the end, the cult of death receiving its own.