Would that this were reality.

The Amazing Mrs. Pritchard is, well, amazing.  Focusing on politics in England, the show centers itself on the unlikely character of Ros Pritchard (Jane Horrocks).  Ros, as the series opens, is the manager of a Greengages grocery store, but she doesn't remain as much for long.

When two candidates standing for a seat in Parliament start a fight with each other in front of Ros's store, Ros gets involved.  Initially Ros just breaks up the fight, but soon after she has a few choice words for the press about the candidates.  Before too long, Ros is giving more and more interviews and running for the seat herself all while forming her own political party.  Then, quicker than one can blink an eye, other people (mostly women) are joining her party and running in their districts.  Pretty soon, current MPs are defecting from their parties to Ros's, most significantly Catherine Walker (Janet McTeer) a shadow minister in the current administration.  The groundswell continues and by the end of the episode Ros has become Prime Minister.

Ros's political party's main point is what we all know, too many of our politicians say and do too little for the people while promoting 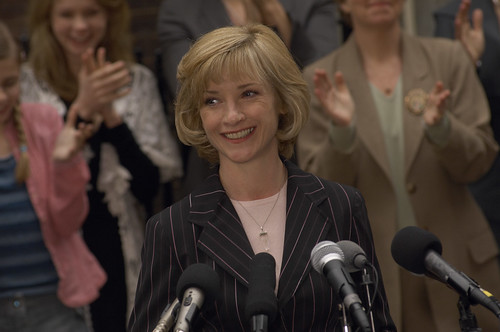 themselves incessantly.  Politicians say this to us all the time with it being little more than hot air, Ros's selling point is the fact that not only does she mean it, it is perhaps true that our politicians do mean it (but being politicians they do not particularly care), but she is not a politician.  She, to this point, has not been a part of the problem.

Acting as sometimes support, Ros has a family of her own.  They have to struggle dealing with this curveball, too.  Her husband, Ian (Stephen Mackintosh), may have the most difficulty with Ros's running and her new job early on, but it is her eldest daughter, Emily (Carey Mulligan) that may have the worst time of it.

Yes, the entire event is unlikely.  Ros getting elected is highly improbable.  Ros's party winning a majority is utterly impossible.  But, it is truly marvelous and only the first hour of the six hours in the season.

The last five hours never quite recapture the wonder and amazement of the first one.  There is a certain whimsy and charm in that hour that would be nearly imposs 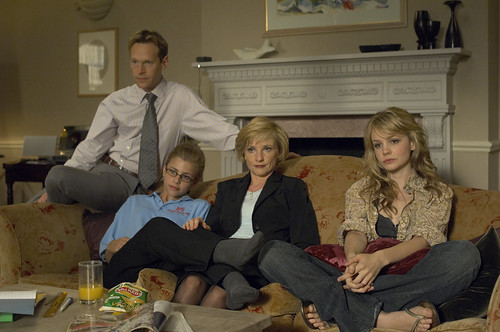 ible to put into every moment of the series.  Yet, each of the subsequent episodes throws new challenges before Ros and her team, and her status as a novice both helps and hinders.

Lest one believe that the show does not believe in anything that politicians do, the series does, regularly, acknowledge that there are good things about them too.  When Ros is running for office she unquestionably puts forth the notion that her party will need people that know the way Whitehall works.  She also, very wisely, points out that they will need people on their team that understand the economy as a whole.  The show could have gone very, very wrong putting forward a Ros who would believe that "running the economy can't be that different from managing a grocers." Lesser shows may have gone down that road, but The Amazing Mrs. Pritchard is wiser than that.

Every episode focuses not just on the political problems that Ros and her compatriots face, but her family's problems and transformations too.  The show deftly balances the two, even causing them to intersect when necessary.

The show moves forward with one impossible conceit:  Ros Pritchard is in charge of the nation.  But, from there, everything that follows seems down to earth, logical, and almost wholly believable.

The saddest thing about the show is that it will never actually happen, nor will anything similar.

The Amazing Mrs. Pritchard airs as a part of Masterpiece Theatre on PBS at 9pm ET/PT from October 21 to November 18 and is well worth adding to your calendar.  Check your local listings for specific times and dates.