Seemed to be more of a tease than a real in-depth look at the artist.

Offstage with Lorianne Crook had its season debut this evening on the Great American Country network. The show provides a glimpse into the off-stage lives of today's major country stars. Host Lorianne Crook has been in the country music business for a long time, and is well respected for her interviewing skills, most notably in her TNN program Crook and Chase. The season premier was with the reticent Trace Adkins, and while it was an interesting program, it was more of a tease than a real in-depth look at the artist.

Trace Adkins is a guy who has a lot more to say about himself on stage than he does in conversation. He seemed more comfortable using his chain saw to clear a path to the lake than when he was finally sitting in a chair by the lake talking with Crook. For her part, Crook tried to draw out Adkins and get him to talk about himself, but he seemed camera shy and unable to relax in that role. 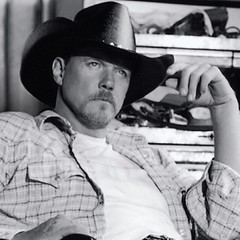 Given what they had, the editors did a fine job of maintaining a level of mystery to keep the viewer interested. Nearly every break featured a tease that was sure to keep the viewer watching for more. Sadly, most of the teases contained the best part of what was to come, and the rest added very little to the whole.

In any case, kudos to Adkins for holding up so well, despite the intrusion into his sanctuary. He seemed very human and real when he expressed his love for his home and described how he created a paradise out of the wilderness. Maybe Crook's hands-off approach really was for the best. It let Adkins share more of himself through the product of his labor than he could say in a half-hour television program.

If the program did not satisfy your curiosity about Adkins, then let your thirst for more be slated by a collection of 31 fan-submitted questions answered by the man himself.